OK, here's our hours during the holiday home stretch:


Yes, it's a new, ongoing series from the one and only Kevin Huizenga.  Picking up where Ganges left off, Huizenga continues to explore the far reaches of the communicative capabilities of the comics form. 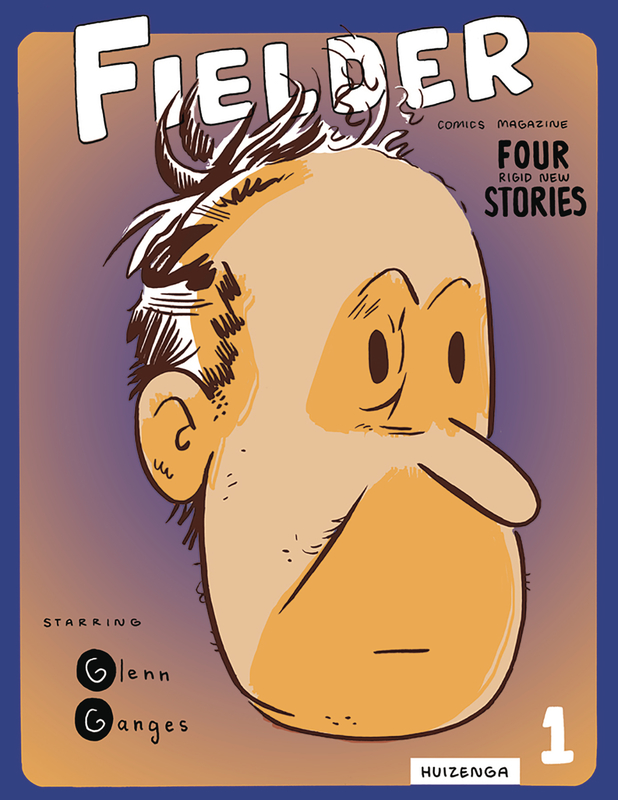 The issue opens up – after an intriguing symbolization of the nature of thought on the inside front cover – with Bona, a deconstructive remix of Sam Glanzman’s Kona (which featured, improbably yet likely, scripts by Lionel Ziprin), published by Dell in the early 1960s.  This story, which is bifurcated, with another, earlier part of the story appearing later(!) in the issue, highlights formal aspects of classic comics narratives while simultaneously reflecting on their generic tropes and the cultural milieu that produced them.  Experiencing this remix in the context of our current historical juncture (read “Trump era”) provides added insights into our primitive/primal roots as members of warring sub-species vying for control and domination. Additionally, in plunging the reader immediately into this saga, in medias res, Huizenga, by referencing a relatively obscure, yet well respected instance of the great historical tradition of comic books, effectively announces at the issue’s outset that Fielder too is part of this tradition; is a comic book.

Next up, after sleeping through a decade (see Ganges #s 3 - 6), our hero, Glenn Ganges finally, and after a mighty struggle, awakes, rises and meets the day here in the pages of Fielder #1.  During the course of this arriving at wakefulness, readers are presented with intriguing diagrammatics laying out the porous border territory between the states of sleep and awake, along with an in depth exploration of the actual mechanics of waking itself.  Once awake, Glenn wastes no time before proceeding into a querying of the relationship(s) between consciousness and reality that serves in turn to question the sleep/wake divide, leaving readers with plenty of food for thought.

The issue’s pièce de résistance is G~~~~ G~~~~ in “My Career in Comics”, a deliberately obscure (as the title indicates) yet playful – even joyful (at least, by Huizengian standards) – exploration of comics representation.  Taking the form of an autobio comic while gleefully overturning the norms of the genre and subverting its assumptions of veracity, "My Career in Comics" nonetheless ends up, counter-intuitively, being one of the truest and most in-depth instances of a “self portrait of the artist” that comics has yet produced.  Huizenga has no problem with puncturing his own pretensions as obscure, and in fact, doing so is necessary to the aims of the story – yet, ironically, he understands that their very obscurity makes them potentially unrecognizable to others, and so, in order to effectively puncture them, decides to substitute a more visually communicable concept as a stand-in for his own actual formal concerns in order to more effectively represent their deflation and the relationship it bears to the story’s theme (“Wait, what?” you say. Exactly)  The story also extends Huizenga’s confrontations with temporality in its deliberate falsifying of chronologies in subtle – and not-so-subtle – ways.  Ultimately, the story asks its readers to confront the question of representation’s relationship to reality and makes a case for comics’ combination of words and pictures as being particularly well suited for this task.  In so doing he has created an instant classic of the form, one that is sure to be both enjoyed and studied for years to come.

Not a square inch of space is wasted in this issue (unless you count the UPC code :), as the back cover along with both inside covers are gainfully employed in the service of comics, with the inside back cover serving in particular to remind readers of the comic book form's historical function as a nexus of art and commerce.  While the material in this issue is, on the surface, wildly disparate, underneath, the mechanics are all of a piece, and all the pieces are linked in their formal concerns.

This issue also contains what could be considered as the apotheosis of Huizenga’s long-running series of short pieces, Fight or Run.  Here the Fight or Run series is given a meta-fictional treatment that leads inexorably to a metamorphosis.  This piece can also serve as a synecdoche for the experience of reading Fielder #1, in which the comics leap off the page into the reader’s consciousness where they will settle, ferment and lead to the creation of new forms that will further evolve the great historical body of comics.


PLEASE NOTE:  The shop will CLOSE EARLY – at 2:00pm – on Wednesday, Noevember 21, and then be CLOSED on Thanksgiving Day.  The shop will then be OPEN regular hours Friday, Saturday and Sunday.

Here's to making America a place where everyone can have reason to give thanks to be here. 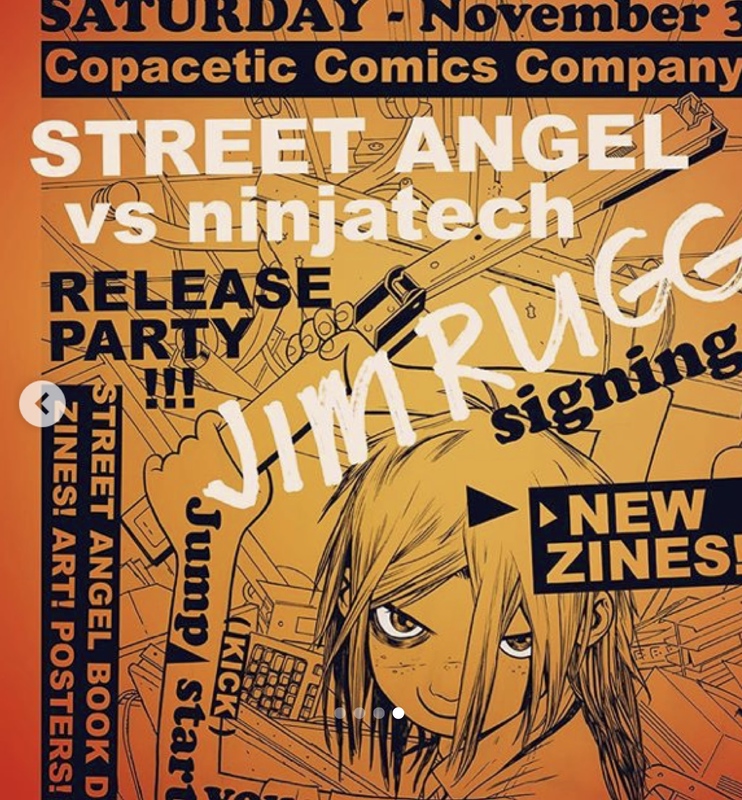 Join us THIS Saturday, November 3, from 7 to 9pm, to celebrate the release of Street Angel vs. Ninjatech, the final volume in this year's series of original hardcover Street Angel comics from Image. Jim Rugg will be on hand to celebrate the completion of this run, and, in addition to signing books and discussing his work, he will bringing along his latest batch of exclusive limited edition zines and more – PLUS he will be bringing a (very) limited number of FREE prints and posters – first come first served!

And here's a look at some of what you can expect to find on hand. 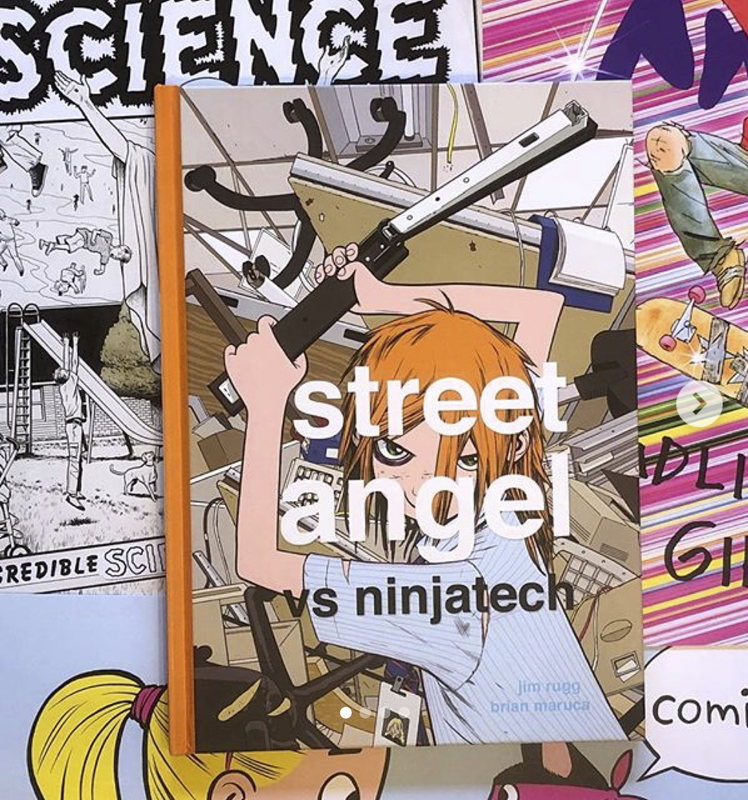 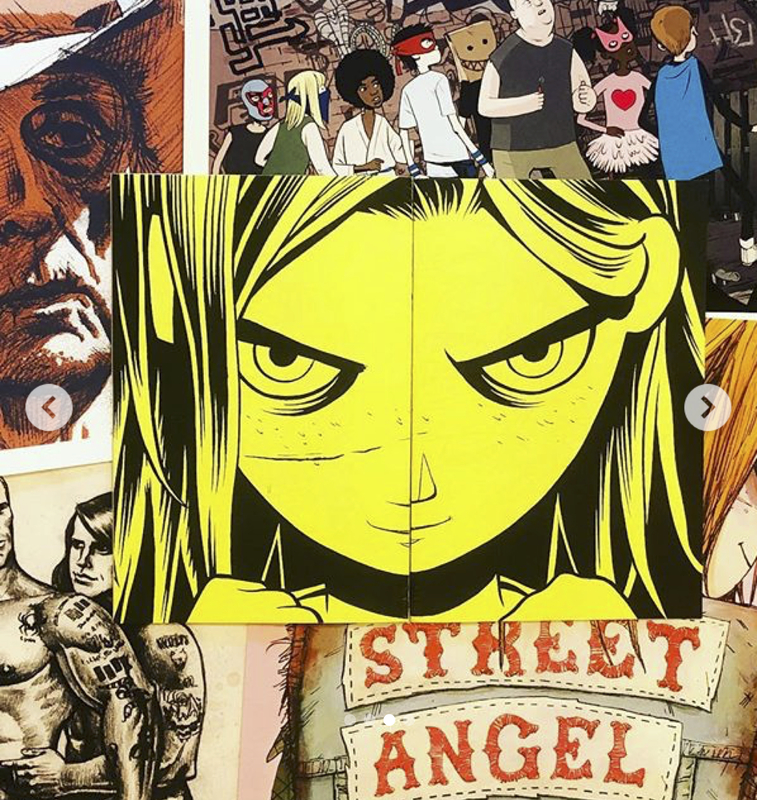 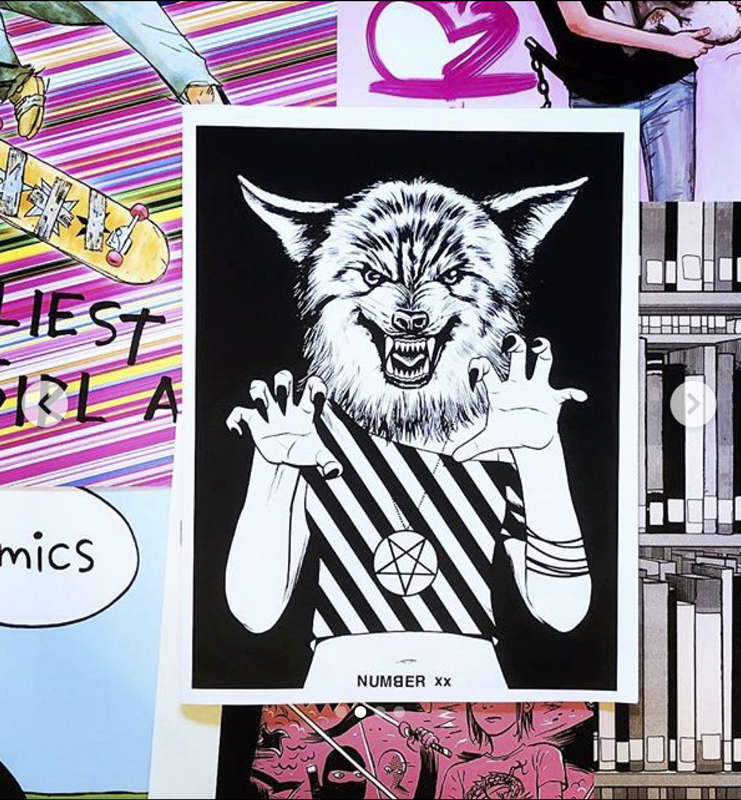 
There are quite a few events lined up for October at Copacetic – and then, on top of that, there's the Pittsburgh Zine Fair!

First up, on Monday, October 9, starting at 6pm, at Kaibur Cafe, downstairs from Copacetic: Come witness a live multimedia reading by Ezra Claytan Daniels (Upgrade Soul) and Ben Passmore (Your Black Friend, Dayglo Ayhole)!  Then, from 7 to 8pm (at least) join us and the rest of the Pittsburgh comics cognoscenti up at Copacetic HQ on the third floor for comics and conversation with the creators. And, yes, of course, their books can be bought – and signed – on the spot! 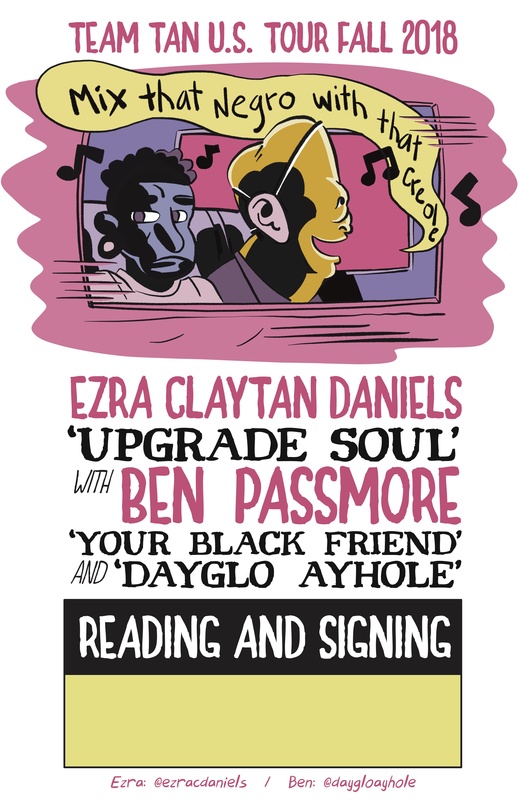 Next, a mere two days later, we welcome Matthew Thurber, as we celebrate the release of D & Q's deluxe hardcover collection of his hard-to-find, cult comics series, Art Comic.  And, this time around it's in full color!   So, please be sure to join us from 6:00 to 8:00pm on the evening of Wednesday, October 10. (And stay tuned for further details.) 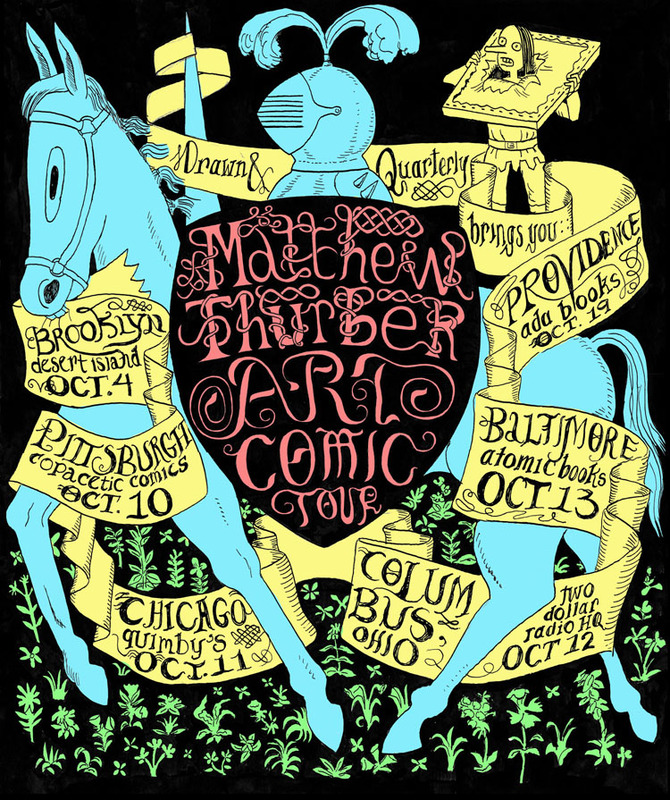 Then, the following Sunday, October 14, it's the Pittsburgh Zine Fair, once again at the Union Project (801 N Negley Ave, Pittsburgh, PA 15206), from 2pm to 8pm. This event is free and open to the public! 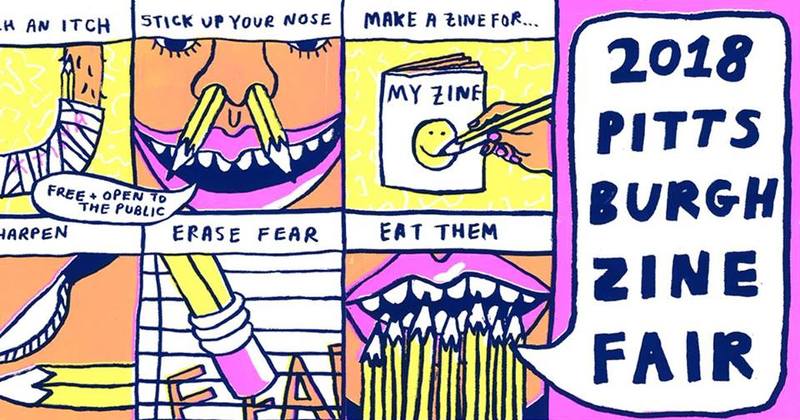 The following Saturday, October 20, we will once again host the release for John Peña's annual collection of Daily Geology, from 7:00 to 9:00pm.  (Stay tuned for further details.) 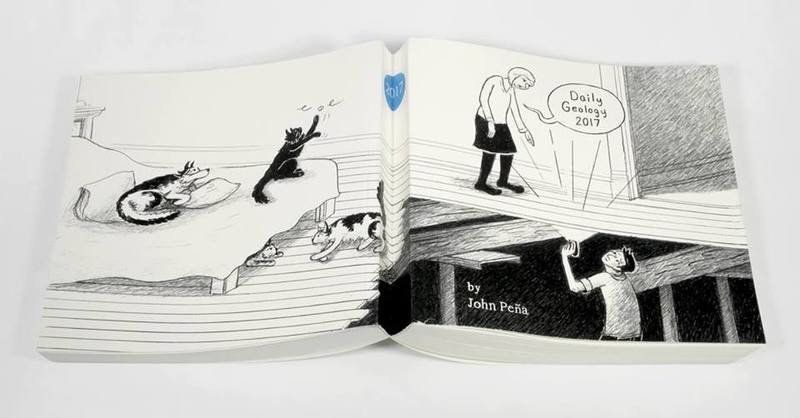 And then we cap the month off with another SPOOKY PARTY!  Mark Saturday, October 27 on your calendar and prepare yourself for new comics by Nate McDonough, Bill Wehmann and more! Announcements pending... 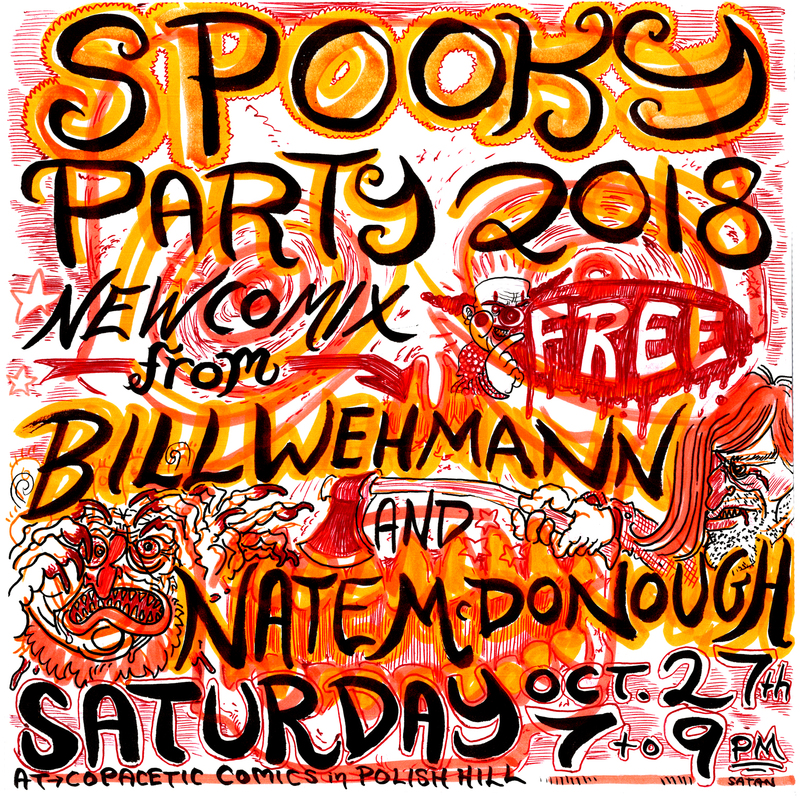