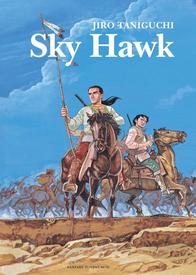 Action and adventure comics simply don't get any better than this epic graphic novel by Jiro Taniguchi.  Conceived of as an homage to the "spaghetti westerns" of cinema and bandes dessinée – especially the Lt. Blueberry series by Jean "Moebius" Giraud, Taniguchi outdoes them all in this tale of cowboys and indians... and samurai!

Sky Hawk is an historically accurate account of the post-civil war American west. As the railroads spanned the continent, an alliance (some might call it a conspiracy) of the railroad companies, the US government and gold hungry settlers of European ancestry pushed the Native American Indians off of more and more of their traditional lands.  This inevitably led to conflicts, clashes, battles, and all-out war.  As this was occurring in the American west, across the Pacific Ocean Japan was in the midst of what has come to be known as the Meiji Restoration.  This too was triggered by the armed might of the US.  Led by Commodore Perry, in 1853 America more or less forced Japan to open to "the west."  Japanese leaders soon after realized that they needed to modernize their society in order to avoid being colonized.  As a result, Japan's traditional feudal society of lords and their retinues of samurai warriors was brought to a close, and a market economy was institutionalized.

Here in the pages of Sky Hawk, a pair of these newly unemployed samurais emigrate to America and find themselves in the middle of the epic conflict then unfolding in the American west, specifically between the Oglala Sioux – and later, also the Lakota Sioux – and the Euro-American settlers, the Railroad companies, and, finally, the US Army.  The action then unfolds according to the conventions of the (spaghetti) western genre.  In the masterful hands of Jiro Taniguchi – who passed on to the next plane of existence in 2017, to the watch over comics readers from his throne in the comics pantheon – these conventions are merged with those of the samurai adventure and apotheosized in this one-of-a-kind graphic novel.  Readers will encounter the historical figures of Crazy Horse, Sitting Bull and General George Custer and some historical battles will be depicted, but this is primarily a work of fiction that is the product of Taniguchi's inspired imagination.  And, while cultural appropriation is inevitable in any work of this sort, Taniguchi is clearly very sympathetic to the culture of Native Americans, and does as good a job of representing their plight here in Sky Hawk as in any comics work we have ever encountered.