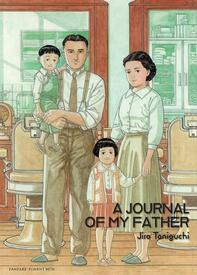 Originally published in Japan in 1995, Jiro Taniguchi’s A Journal of My Father, a moving tale of a son’s memories of growing up in Tottori, a small city on the sea of Japan, has at last made it to American shores in English translation (by Kumar Sivasubramanian assisted by Chitoku Teshima). As the title suggests, the story centers on the relationship of  the son – Yoichi – with his father, who, we learn at the outset, has just died.  The story is divided into twelve chapters which, while there are several especially significant moments that recur, take the reader on a chronological journey from Yoichi's earliest memories up to the present.  While many specific details of his family's experiences are uniquely theirs, the emotions experienced by the participants are universal, and most readers are sure to find themselves strongly connecting at any number of points as the story unfolds, even if for different reasons.  Fans of Ozu will appreciate the refined structure and expert pacing, which are a piece with the levels of emotional reserve that predominate – but which also serve to accentuate the rare emotional outburst.  Additionally, A Journal of My Father does double duty by having the experiences of the Yamashita family that make up the novel serve as a synecdoche for post-war Japan as a whole, and in this way provides a small window on the changes of those years while also demonstrating the fixity of Japanese cultural traditions and familial bonds.  The richness and nuance of the story are no doubt enabled by Taniguchi’s decision to root the story in his own experiences, as Taniguchi too grew up in Tottori at the same time as his fictional creation, Yoichi.

Jiro Taniguchi, who passed away four years ago, in 2017, time and time again managed to create comics that infuse the mundane and quotidian with an enlightening imagination that makes it come alive.  It is worth noting that while Taniguchi’s works are also largely formed from a strongly masculine perspective – and this one, with its focus on the father-son relationship, is certainly no exception – it is clear that here, in the pages of A Journal of My Father, he has striven to represent the feminine point of view as well and worked to elucidate the dynamic underlying traditional Japanese gender role formations.

In short, another classic.