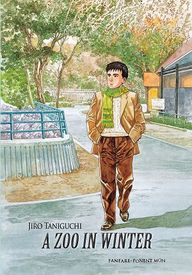 Fans of Taniguchi's singular work, from the classic Walking Man (which the cover image at left meaningfully evokes) to his ongoing Summit of the Gods, can now rejoice with the release of this new hardcover release (which is, amazingly, priced less than his last few softcover releases!). Originally released fairly recently (2008) in Japan, A Zoo in Winter's 231 pages amply display Tanuguchi's mature skills as he combines all of his interests - meditative scenes of walking outdoors, detailed urban landscapes, animals and snow, all in the service of a complex, deftly constructed narrative involving the intricacies of the human heart.  The story is an autobiographical roman á clef recounting Taniguchi's early years, beginning in the winter of 1966, at the point when he had recently moved to Kyoto to follow his dream of being a textile designer. Events there lead him to takie up a friend's invitation to move to Tokyo to work as a mangaka assistant... but we don't want to give too much away here! And as always with Taniguchi, that's just one layer of the complex weavings of the story, there's plenty more going on, all skillfully rendered and deftly paced. Recommended!

Lately, it's been very difficult to get a hold of copies of this one.  It may be out of print?  Regardless, we currently have 2 brand new copies in stock, as a slightly elevated price, reflecting our increased cost.

This item belongs to the categories: Graphic Novel, Copacetic Select, International
You may also enjoy these related titles: