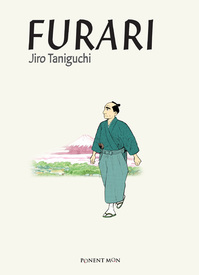 At long last, from the creator of The Walking Man comes Jiro Taniguchi's tale of the small quotidian pleasures of Edo era Japan, and which is likely the book that comes closest to capturing similar moments of mono no aware to those providied by The Walking Man. It has finally been released in English translation by Ponent Mon in this solid hardcover edition.  Taniguchi, one of the greats, passed away earlier this year (2017).

Now out of print, BUT, we managed to dig up a couple copies of this Taniguchi masterwork that effectively and movingly captures both an era and a state of mind... ONE left!