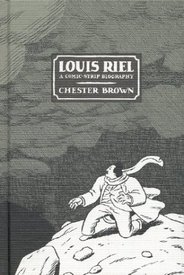 This book is a downright hefty tome that's nicely put together.  It features a textured hard cover with 276 interior pages on a heavy cream colored stock.  Done in a style deliberately reminscent of Harold Grey's Little Orphan Annie, Louis Riel is sub-titled, "A Comic-Strip Biography."

"Who is Louis Riel?," you may well ask.  Well, that's exactly what this book sets out to answer; and then some.  Not to leave you entirely in the dark, however, we will tell you that Louis Riel was a Metis (descended from both French immigrant and native American Indian stock) Canadian whose adventures took place primarily during the second half of the 19th century, and that he was an important, if little understood, figure in Canadian history.  Brown's life of Riel weaves an intricate mosaic of political intrigue, big money scheming and the rugged and sometimes brutal struggles between the native settlers and the power brokers that are out to add them to their conquests.

This fascinating fable of frontier life presents one man's metaphysical struggle for meaning, and in the process creates an allegory for the ages that has more in common with current events than you might think.

SPECIAL NOTE :  This listing is for the signed (by Chester Brown, of course) and numbered hardcover edition.  This edition was limited to 400 copies.  We have ONE COPY LEFT.  It is #66/400.  The tipped in signature plate includes an extra page NOT (at least, to the best of our knowledge) included in any other edition!