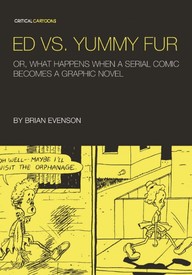 It was bound to happen sooner or later, and now it has:  a uniform series of critical essays on comics; each focusing on a single work, series and/or creator; in book form á la the BFI FIlm Classics and 33 1/3 series, which focus on cinema and music respectively. The series is titled Critical Cartoons, and it is being poublished by Uncivilized Books in Minneapolis.  Ed vs. Yummy Fur is the premiere volume in the series (the next focuses on Carl Barks).  What we have here is a 136 page softcover that is heavily illustrated with selected panels and also includes an 8-page glossy insert (at the back) that reproduces select covers in full color.  The book itself provides an in-depth look at the various forms which Ed, the Happy Clown has taken – five in all, by our count – each of which is distinct from the others (some vary from the others to a great degree, others only minorly).  We can easily recommend this book to Chester Brown fanatics (hello, are you out there? anyone?), but anyone interested in learning about the transition/translation of serialized, periodically released comics to stand alone "graphic novel" form will find plenty of food for thought here.  Few, if any (OK, OK - Chris Ware probably takes home the prize in this category), have spent as much time obsessing over how to present their works in the various forms available to them as Chester Brown, and nowhere moreso than with Ed, the Happy Clown, the work that put him on the artistic map, and still stands as a major and unique achievement.  Readers who are only familiar with this work through its 21st century incarnations from Drawn and Quarterly may be surprised to learn that over a quarter of the original work as it appeared in Yummy Fur was exised in the editions they have read, and that this portion of the tale is, in fact, only availalbe in the original issues.  This is covered here in the chapter, "Lost Pages," perhaps the most intriguing section of this book.  ADDED BONUS:  there's also a twenty page interview with Chester, conducted specifically for this book, in which he spcifically addresses many of the issues raised by the text.