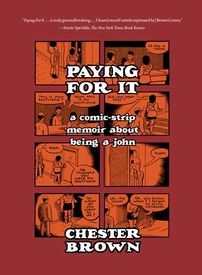 Paying for It (softcover)
Chester Brown
published by Drawn and Quarterly

Chester Brown is one of the greats of cartooning.  His bravery in baring his soul in pen and ink is unmatched, in our opinion, even by the legendary R. Crumb, in whose footsteps he follows, and who, quite fittingly, has provided the introduction to this work.  In Paying for It, a 280 page hardcover that is his first new work in eight years, he bares his soul and reveals a world in which sex is an end in and of itself, a consumer good like any other.  Ironies abound as he comparison shops, debates tipping percentages and searches for value.

Chester's brilliance as a cartoonist so utterly overshadows his skills as a polemicist, that the book, which is putatively a defense of decriminalizing prostitution, is transformed into something else entirely: an implicit indictment of the commodification of human sexuality by contemporary corporate capitalism (as prostitution is widely proclaimed "the world's oldest profession," there is obviously a long history of ways to approach it that predate the Marxist critique evoked here; among them is certainly an argument constructing this development as beneficial and constituting progress...).

His decision to render the entire book in exceptionally small, uniform, rectangular panels set in an unvarying (except at chapter closings) eight panel grid (see cover illustration at left) is, for starters, an immediate indication of his rigid and inflexible mind set going into this work.  This decision is further indicative of denial.  While Paying for It is the most sustained and focused work of actual pornography – at least as the dictionary originally defined it at the time of the term's coinage ("Description of the life, manners, etc., of prostitutes and their patrons" -- Oxford English Dict.) – in the history of comics, it is clearly designed to deny satisfying the prurience that has come to be commonly associated with the consumption of pornography, as it is difficult for anyone to get all hot and bothered by tiny, minimalistic renderings of copulation.  In so punctiliously presenting his story, he has gone out of his way (consciously or unconsciously we cannot pretend to know) to both spare himself from any extraneous and evidently unwanted stimulation, and from in anyway putting his readership at risk of sharing his own fate:  for to anyone who has read his 1992 work, The Playboy (now at last back in print to coincide with the release of this softcover edition; thank you D & Q) and it's even more devestating follow up, I Never Liked You, it is prurience that has driven him to pursue this path in life .  As a fragile and impressionable adolescent, Chester was corrupted by the literally consumable sex objects that Playboy Magazine's superficial representations of women provided, and that he paid for, "used" and then hid away, before he had the opportunity to experience any sort of actual intimate relations.  Paying for It repeatedly reveals that for Chester it is the superficial physical appearance – and the proximity thereof to that of a Playboy centerfold – that is the primary, if not sole, initial criteria for his selection of a particular prostitute.  This is a clear indication that Chester's adolescent encounters with Playboy, Inc. left an indelible imprint upon his psyche that continued to inform his sexuality long into his adult life, and quite likely contributed to his evident lifelong inability to successfully form mature intimate relations until finally, apparently, managing to do so... with a prostitute*.

It is worth noting here that Paying for It bears remarkable similarites to David Heatley's graphic memoir, "My Sexual History" which initially appeared in Kramers Ergot 5, published in 2004.  Both are exhaustive cataloguings of their respective author's sexual activities over a specified period (in Heatley's case, nearly his entire life), both adopt the formal device of rendering the narrative in a uniform grid of relatively tiny panels, and both, intriguingly, cease cataloging their sexual activities at the border of their current, primary sexual relationship – in Heatley's case, that with his wife, and in Chester's, that with the prostitute with whom he has entered into a stable, long term arrangement/relationship.

The copious notes that accompany Paying for It and that are intended as a polemical defense of his actions are entirely fatuous as they are wholly based on the supposition that sex is a consumer good that should be treated as an end in and of itself; with that as a given, it is, of course, all too easy to successfully defend prostitution.  All notions of making love, creating and raising families and building the future of our collective civilization – the actual functions of human sexuality – are entirely absent here.  And gender issues, the most fraught aspect of prostitution...?  Most significantly, for  the purposes of this review, all the arguments in favor of prostitution are completely undercut by the piteous portrait Chester has presented of his life.  While the reader can understand that prostitution has helped Chester, the narrative of Paying for It reads like the treatment of a disease, in which prostitution is the cure.  Chester's earlier works have already provided long time readers with a convincing ætiology for this disease, and allow us to fully empathize with his decisions presented here and, taken together, provide us with the big picture we need to fully comprehend the slings and arrows of outrageous fortune that brought him to this pass, and in the process expand our comprehension of the human animal.

The softcover edition of Paying for It is updated, with ten pages of new notes not included in the hardcover that deal primarily with reactions to and receptions of its initial hardcover publication.

*(who may very well have a child of her own, thus allowing the possibility of Chester ending up, via a uniquely tortuous path, in a traditional nuclear family after all)