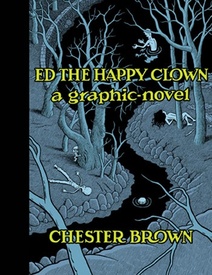 Hallelujah!  Finally.  Ed the Happy Clown is back in print in book form for the first time in decades.  This is the ground breaking work that both put Chester Brown on the map and broadened the horizons of comics in the 1980s, causing a seismic shift in its landscape and charting a new direction away from heroic fantasy through a methodology that, in hindsight, can be seen to be – at least in some respects – a deconstruction of the psychological as well as epistemological underpinnings of that genre, which has since become dominated by corporate entertainment behemoths; which makes sense when considering that Chester was briefly in their thrall to the point of actually trying to work for DC and Marvel.  Superhero comics (at least of those of Chester's youth) encode identities wed to idealistic self-images that ask the reader to deny the coporeal, animal aspects of human being, to split them off and project them onto others – the evil villians – which are then to be overcome by the hero, which, while often temporarily defeated and subdued, eternally recur in the same or new form.  These aspects of being cannot be effectively banished for the simple reason that they are part of the human, and their splitting off can never be successfully maintained in this life.  In Ed the Happy Clown – which, (quite) significantly was often paired with a back-up feature adapting New Testament Gospel; Mark, followed by Matthew – these aspects are reintegrated back into  comics identity with a vengeance.

This epic saga of self-discovery that was simultaneously a saga of self-annihilation originally ran in Chester's flagship title, Yummy Fur.  Beginning life as a self-published mini-comic that lasted seven issues, it went on to run for 32 issues. Yummy Fur   was a classic auteurist single-artist comic book series, written and drawn by a natural cartoonist, that was – along with Love and Rockets and Neat Stuff, and later Eightball, Hate, Dirty Plotte and Palookaville – one of the few essential comic book titles of its day.  The first 24 issues were published by the now defunct Vortex Comics, before moving to Drawn and Quarterly, which has remained Chester's publisher ever since.

Chester went on a journey to the center of his mind and found the secret hideout of his super ego, whereupon he burst in, knocked it out, tied it to a chair and then put a strip of duct tape over its mouth.  Then he took its keys and let out all his own thoughts, impulses, drives and urges that the super ego had kept locked up since adolescence and let them run amok for eighteen consecutive issues of Yummy Fur.  The end result is Ed the Happy Clown.  Not for the faint of heart, it is a steaming scatological cauldron into which Chester poured the contaminants of his soul.  Prepare yourself for a series of free flowing associations like none other, where "Ronald Reagan" is reincarnated as a talking penis, where a vampiric succubus is brutally stabbed during sex by her partner, where shit pours out of one dimension into another through an unsuspecting anus, and much much more.

It bears noting that Ed is is best approached as a surrealist work.  Surrealism began as a literary movement, devoted to automatic writing – a writing that works to  channel the unconscious id straight onto the page, unfettered by the controlling ego, and this was precisely the spirit in which Ed was created.  Comics are arguably the superior form in which to employ the surrealist method.  Comics can move straight through the visual cortex while simultaneously connecting to the language centers in the brain, allowing a unique combination of neural firing that assists in short-circuiting the super-ego.  There is certainly a precedent to Ed in R. Crumb's late 60s work, and the surrealist vein continues to be successfully mined today by artists as diverse as Christopher Forgues (C.F.) and Chester's fellow Canadians, Marc Bell and Michael DeForge, yet it remains the yardstick by which all others are measured.

Previously published by Vortex in two different editions, both incomplete in different ways, and the second of which came out twenty years ago, Ed the Happy Clown is at last given the Drawn and Quarterly treatment in this definitive – at least for now; you never know for sure with Chester, who was, at one point, at work redrawing the entire work – edition, that is promised to arrive with a new foreword by the author and an extensive notes section (presumably also by the author and taken from the nine issue series released by D & Q in 2005).

This item belongs to the categories: Graphic Novel, Copacetic Select, Collections
This item is part of the series: Ed the Happy Clown
You may also enjoy these related titles: