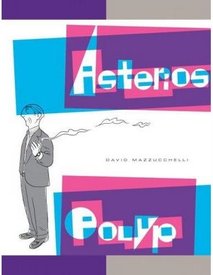 
This is perhaps the longest awaited work in the history of comics (No?  Let us know what, in your estimation, beats it.).  Over ten years in the making,  Mazzucchelli's first ever solo graphic novel, is also his first major work since his 1994 graphic adaptation of Paul Auster's City of Glass, a trailblazing, highly influential work which put him at the forefront of the then nascent "serious" graphic novel movement.  David Mazzucchelli's work with Frank Miller in the mid-80s -- Daredevil: Born Again and Batman: Year One -- made him a mainstream comics superstar, but then he walked away from it all to pursue his own calling of an independent, more thoughtful form of comics and became a legend in the process.  And now here we are, over twenty years later with his most important work.  Talk about anticipation!  Mazzucchelli has spent the last decade pondering the possibilities and potentials of the comics form and Asterios Polyp embodies his findings.  Metaphysical speculations in comics form combine with Mazzucchelli's own idiosyncracies, Eisnerian pathos, and a notable Japanese aesthetic, as well as explorations and deconstructions of the printing and production process that shows commonality with contemporaries Paul Hornschemeier (specifically The Three Paradoxes), Dash Shaw (particularly Bodyworld), and Frank Santoro (pretty much everything), all of which is woven together in a tale clearly inspired by classical Greek mythology, dramatics, and philosopohy that commands the reader's full attention, forcing perceptual and conceptual apparatuses into overdrive and demanding multiple readings.

There is simply no disputing the formal qualities of this work.  Mazzucchelli has a command of the language of comics that is all his own.  He set to work over a decade ago with the goal of bringing to fruition in a single graphic work the seeds of the abstract ideals he has long held for the medium of comics.  He has brought in the harvest with Asterios Polyp, which yields up a cornucopia of developments and devices that will unquestionably advance the communicative powers of the medium of comics as they are absorbed by his peers and students, as well as the generations of cartoonists to come.  The transformative abilities that inhere in the quality of line are given a formal analysis unprecedented in the pages of a graphic novel; color and its reproduction are explored in a reconstructive manner that works from the ground up to point out the simply unbounded expressive possibilities of color when intelligently and purposefully employed;  the centrality of page layout and the importance of rhythm are given an effective demonstration; the question of how to visually represent the differences in the perceptions as they relate to memory (indeed, memories - as Mazzucchelli delves into ways to indicate how different memories have different emotional weightings), imagination and dreams is also given a formal workout.  As an added bonus, Mazzucchelli brings to Asterios Polyp a grasp of the history of art – most notably that of classical antiquity –  that is unmatched by all but a handful of his peers.  This knowledge lies unobtrusively beneath the surface of the pages, providing layers of subtle but very real depths which are there for all who can perceive and appreciate them.

There is, too, a deep irony to this work.  The central narrative thread – the warp through which the weft of the formal explorations are woven – involves an examination of the negative consequences of the overly analytical and controlling nature of protagonist Polyp's own character.  And so, while Mazzucchelli is clearly a great master in complete control of his skills, and the greatest strengths of the book Asterios Polyp are it's rigorously analytical (and, it must be said, aesthetically pleasurable) approaches to and demonstrations of the formal characteristics and capacities of the medium of comics, it is the over reliance on precisely these traits that embody the titular character's Achilles heel and bring about his fall from grace.  This creates a tension between form and content that the work fails to resolve – a failure that, to his credit, Mazzucchelli appears to acknowledge at the book's conclusion; satisfying himself with a successful articulation of this irony, and leaving it to subsequent works – whether his own or others', only time will tell – to unravel the nature of this particular paradox.

City of Glass: The Graphic Novel