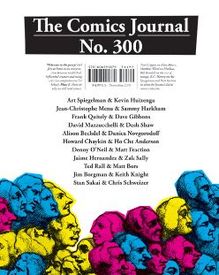 This is, reportedly, the last issue of the Journal in it's current format.  After this it will become a hybrid publication:  updated daily online with the news, reviews, and opinion pieces that have been Journal mainstays for many a decade now, and then, a semi-annually published deluxe book-like edition that sounds like it's taking its cue – at least somewhat – from Comic Art Magazine.  That said, this format is going out with a real BANG!  Its 286 pages are packed with some of the greatest comics conversations you are likely to find under one cover anywhere!  Check it out:  The ball starts rolling with a whopping 32-page exchange between none other than Art Spiegelman and Kevin Huizenga – this one alone is worth the price of admission; this is then folowed in due course by conversations between Jean-Christophe Menu and Sammy Harkham; Frank Quitely and Dave Gibbons; David Mazzucchelli and Dash Shaw; Alison Bechdel and Danica Novgorodoff; Howard Chaykin and Ho Che Anderson; Denny O'Neil and Matt Fraction; Jaime Hernandez and Zak Sally (!); Ted Rall and Matt Bors; Jim Borgman and Keith Knight; and Stan Sakai and Chris Schweizer... whew!  So what are you waiting for?  You know you can't pass this one up!

This item belongs to the categories: History & Biography, Journalism & Travel
This item is part of the series: The Comics Journal
You may also enjoy these related titles: