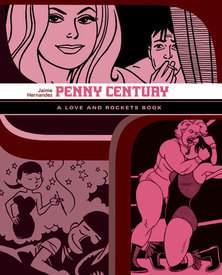 Well, talk about an embarassment of riches!  Not only have we been treated to the long awaited Art of Jaime, but now we also have the latest in the splendiferous series of trade paperback volumes that, since 2007, have been repackaging the classic work of both Jaime and Beto.  Penny Century is the fourth Jaime volume and the first to present his work that appeared after the conclusion of the initial seminal run of Love and Rockets.  The book opens with the one of kind classic of comics choreography that is Whoa Nellie!, Jaime's 68 page ode to women's wrestling.  Then we are treated to the super fabuous experience of the Maggie and Hopey Color Fun one-shot in glorious black & white.  The bulk of the book collects the titular seven-issue series in its entirety (yes?), followed by the "secret origin" of the lead character, "Bay of Threes," from the fifth issue of the second volume of Love and Rockets.  248 pages of Jaime Hernandez in fine form.  Is there really anything else that needs to be said?