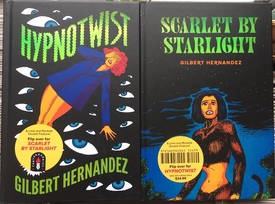 ot off the press, it's the latest addition to the canon of Gilbert Hernandez's series of hardcover "movies" that have been "shot" within the Love and Rockets universe, and "starring" characters –  most notably, Fritz – who live there.   This time around we have... a double feature!  Packaged like the Ace Doubles of yore – with two front covers and no back covers, as soon as you've finished one, you can flip it over and read the other – or savor the moment and save it for another day, the choice is yours.  If either of these stories looks or sounds familiar to long time Love and Rockets readers, that is because they each appeared around ten years back:  Hypnotwist – a surreal, dreamlike (and entirely wordless!) tale – in Love and Rockets: New Stories (V3) #2 (in, however, a significantly shorter version; roughly 2/3 the length of what is here); and Scarlet by Starlight  – a science fiction tale set on an alien world, that, we should warn you, uses this alien world as a stage set and pulls back the curtain on some of the darker primal drives lurking below the surface of  human civilization – in Love and Rockets: New Stories (V3) #3.  Now, at last, each of these worthy tales have been given a permanent home.

(And, yes, those round yellow stickers do peel off, just take your time and peel slowly...)

This item belongs to the categories: Graphic Novel
This item is part of the series: Love and Rockets
You may also enjoy these related titles: