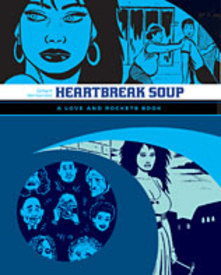 (Book Two of the New Edition of the collected Love and Rockets) Most frequenters of this space are hep to the wonder of Love and Rockets. However, there are still those who have yet to see the light. Are you someone who still hasn't managed to get around to reading the greatest comics ever produced? If so, all we've got to say is: if you haven't read the original run of Love and Rockets (in any one of its extant formats) and you are trawling the web looking for exciting new releases and looking through back issue bins at your friendly neighborhood comics shop for classics of the days of yore, then you are simply wasting your time -- the greatest comics that have ever been produced (and quite possibly that ever will be produced) are already right here, sitting, waiting, 24/7 on the shelf. Those unfortunates among you who have remained skeptical are now offered a new and better chance of getting in on what you've been missing out on in this new series of seven books that will collect the entirety of the first volume of Love and Rockets that was originally published from 1982 to 1996 in fifty magazine-size issues. These volumes are paragons of excellence in every way, including price point (muchos kudos to Jacob Covey for his sporty yet elegant design and to Paul Baresh for his stalwart, spit and polish production). Each book in this series contains approximately 250 pages of comics that will still be standing -- in one form or another -- long after every contemporary Ozymandias has fallen to dust. The odd numbered volumes, beginning with Maggie the Mechanic, contain Jaime's contributions, while Gilbert's can be found in the even numbered editions, beginning with this one, Heartbreak Soup (the seventh and final volume contains all the odds and ends by both Jaime and Gilbert). Well, what are you waiting for? C'mon already!