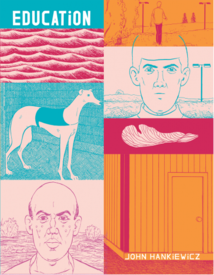 A tour de force of comics formalism, John Hankiewicz's graphic novel, Education is a bolt from the blue.  Hankiewicz's comics work is perilously difficult to describe, but we're going to take a moment to get our thoughts in order here at Copacetic... and make an attempt to back up our encouragement to any and all takers to tackle the challenge proffered by Education, through highlighting its artistic virtues, as it is a work that will offer rewards more than commensurate with the efforts made to come to terms with it.

On the purely æsthetic level of the drawing and, especially, the composition, each page is a gem of fine craftsmanship.  On the level of narrative, it is a thoughtful, complex and multi-layered work.  It is, however, in the formal interplay between drawing, composition and narrative, that Hankiewicz's star shines most brightly.  While the diegesis makes/takes large temporal leaps back and forth, spanning a generation, the comics apparatus by and through which Hankiewicz conveys and contains these leaps is, conversely, composed of an intricate structure of moments that transpire on the temporal axis in minute increments.  This strategy creates a tension within the reader.  This tension is then further heightened by the repetition of absurd minutiae, frustrating the reader's need for linear narrative advancement; but this is a fruitful frustration.  The frustration of narrative expectation allows Hankeiwicz to keep many "balls" (ideas/concepts) in the air at once, and it demands the reader's attention to keep them there.  More than this though, is that this dual attack of temporal tension combined with a frustration of narrative expectation corrals the reader's attention to the underlying rhythms that normally lie hidden beneath the comics reading experience.  It is communicating the existence and form of these rhythms that is Hankiewicz's primary concern*.

Over the course of the roughly twenty years that Hankiewicz has been creating comics, he has developed a visual rhyming scheme, one that, while highly idiosyncratic in its particulars, nevertheless contains a deep structure which can – and has been – used to successfully undergird concerns and particulars of other comics makers who might be interested in pursuing this avenue of comics poetics (please see his collection, Asthma for the key texts in this development).  As one makes their way through the reading of Education, a visual rhythmic meter begins to be felt before it appears; even then it will take multiple run-throughs of the material before this meter can actually begin – evanescently  – to be apprehended.  This is the genius of John Hankiewicz, a genius that is fully on display in the pages of this work, the reading of which convey – and provide – quite an education, indeed.

* Although manifesting them in a wildly different manner, and employing a wholly different set of strategies, the work of Yuichi Yokoyama shares this same primary concern of forefronting the inherent underlying rhythms of comics, and he too has created his own, although completely different, visual rhyming scheme.

Now out of print, but we still have a couple left...