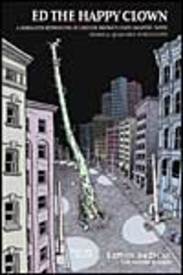 Well, this comic book series pretty much occupies the opposite end of the social acceptability spectrum from Owly:  this is not the comic book you want to share with your mom.  Monsters, clowns, hordes of sociopathic pygmies, severed limbs, blown brains, talking penises... well, you probably get the idea.  Originally serialized in  Yummy Fur from 1983 through 1989, the saga of "Ed the Happy Clown" captured in ink on paper the non-stop hemorrhagic flow of Chester Brown's subconscious as he submitted to the surrealist imperative of spontaneous creation -- without, let it be said, personally identifying with the surrealists themselves (it's all explained in the copious notes that append this issue's installment -- and, presumably, those of future issues -- nine in all -- as well).  This is the work that announced Chester's presence to the world of comics, and it made quite an impact at the time.  Now's your chance to revisit one of the seminal comics of the 1980s, personally guided by the author himself.

This item belongs to the categories: standard pamphlet comic book
This item is part of the series: Ed the Happy Clown
You may also enjoy these related titles: