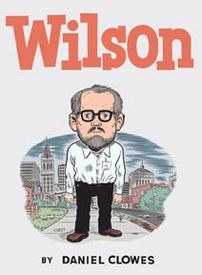 OK, admit it – this is the one you've been waiting for.  Well, it's here, the first original graphic novel by Mr. Clowes; the first, in other words, that did not first see the light of day in his long running solo title, Eightball.  Wilson extends the vein he opened in Eightball #22 (the story that went on to be released as Ice Haven) and continued in Eightball #23 (the yet to be graphic-novelized 1970s "super-hero" story).  In these two works Clowes penned a sequence of stand-alone short strips of varying length each rendered in one of a variety of distinct cartoon voices (aka styles). Through the course of these works, the short pieces slowly coalesce into an organic whole that is greater than the sum of its parts.  In Wilson Clowes employs this technique with a singular focus.  Whereas in the aforementioned works, point of view shifted among and between the characters, in Wilson each and every one of the 71 single page strips, while employing the same wide variety of voices as the other works, features and focuses on the titular character.  In addition, almost all the single page strips contain six panels – with the few that don't all being either seven or eight panels – and the last panel of each strip serves as a sort of "punch line."  Taken together, this homogeneity creates a formal unity between all of the strips and gives a sense that the book is a collection of Sunday page strips that is doubling as a graphic novel.  The cumulative narrative effect of Wilson is to provide the reader with a massive refraction of a single personality and the realization that while context can and does alter the perception of people and events, an individual's character remains and retains an essential unity that undergirds and connects it all.

This item belongs to the categories: Graphic Novel, Gift Catalogue
You may also enjoy these related titles: