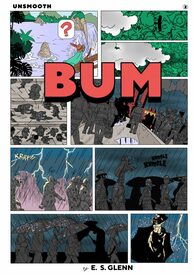 With the arrival of this, the second issue of the series, it becomes clear that the first was but a prologue. Here, in the 88 full color pages of Unsmooth #2:  BUM, E.S. Glenn opens up new portals and reveals previously unseen dimensions of what will henceforth be known as the Unsmooth Multiverse.  Enmeshed within an encompassing framework of ligne claire bande dessinée, readers will encounter mecha manga (along with a snatch of horror hentai) – plus sub-titled anime videos – New Yorker cartoons (and an old school Penguin paperback), cartooned modern art (along with some graffiti), some classical, newspaper Sunday-page strips, photobooth strips, and more.  Oh yeah, and humans and anthropomorphic animal characters (especially of the avian persuasion) mix it up throughout, pressing readers ever further – and deeper – into the realm of comics signification, where the only reality that matters is the one on the page.

It can be deduced from the evidence provided on – and within – these pages that pain and suffering constitute the Dark Matter binding the dimensions of the Unsmooth Multiverse together – with all sorts of Family Drama forming its core; always at risk of collapsing into a Black Hole.  But, this dark matter is simultaneously propelled outward by Repulsive Forces, and can be seen here to be constantly working its way out any way it can:  the portals into the Unsmooth Multiverse are two-way; dimensional gateways, if you will.  Acting out, drinking out, drawing out, loving out, losing out, shooting out, writing out:  these are but some of the paths along which all this pain and suffering is traveling, each pathway enacting a unique set of transformations as it enters into each reader, each variation multiplying the possibilities, creating endless new realities.

The Unsmooth Multiverse is a quantum state, vibrating between the two poles of binding in and working out, transacting within a Causaloid comics architecture, and in the process instantiating an Amplituhedronic vision of existence.

Amazingly, Unsmooth also makes for an engaging and entertaining read: fun and funny; action packed; rife with pathos; smart, savvy, insightful and clever – in other words, it's a great comic book!  It all depends on the angle of refraction.

This issue incorporates Glenn's mini-masterpiece, “The Gigs” – originally published in NOW #8, and appearing here in the full A4 paper size that was its destiny – along with seven other short and not-so-short pieces – including the title track, "BUM", which is this issue's centerpiece – that are simultaneously interactive parts of a single unity of which this issue, in its entirety, forms but a tiny part.

And now – all orders include a free Copacetic collaborative poster!