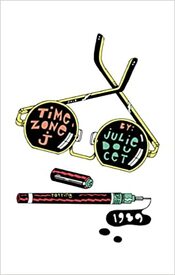 2022 has clearly been a watershed year for Ms. Julie Doucet.  First she won the 49th Angouleme Festival’s Grand Prix (only the third woman to do so).  Then, a month later, her first (drawn) comics work in 15 years, Time Zone J was published to a flurry of press, including in the NY Times (along with stalwarts, TCJ and The Beat and others).  A result of all this publicity is that it, apparently, generated a significant early demand for the book – as we initially struggled to get and keep it in stock.  But, the pressure has abated, and we've managed to put in a good stock.

Time Zone J  opens with Doucet thinking, “I’m 52 now" (which would make "now" 2017/18, presumably when she started the work).  She then proceeds to visually free-associate in a free-form amalgamation of drawings that creates a portrait of her memory banks situated within a visualized mental landscape.  At a certain point she zeores in on a particular set memories of her 23 year-old self traveling to Paris in 1989.  Her comics here are experimental and unique – think a comics equivalent of Free Jazz – and well worthwhile. The entire book is printed in the same Japanese method employed by her 2006 PictureBox book, Elle Humour (currently on special here at Copacetic, by the way) that of the paper being printed on one side only and then being folded over and bound.  Here, in Time Zone J, Doucet takes this printing method and runs with it. It isn’t long before the reader will realize that the entire book is an ongoing, interconnected series of drawings that, technically, together form one epic, single drawing that could (it seems) be assembled into a horizontal scroll of fifty feet, or so, in length.    You can get a feel for what’s in store in this PDF preview, from D & Q (but, by having the pages scroll down in the normal vertical fashion,  when they could – should! – have had the images scroll horizontally from left to right instead, they missed a golden opportunity to show what she was up to!)
This item belongs to the categories: Gift Catalogue, Graphic Novel, Copacetic Select
You may also enjoy these related titles:

My Most Secret Desire