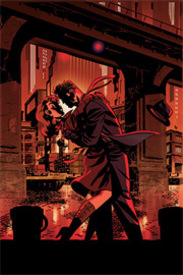 While Darwyn Cooke originally planned for a two-year stint on The Spirit, circumstances conspired to cut his run short at the halfway mark.  The evidence of this final issue -- an exigetical adaptation of Eisner's original Sand Saref story (the same story Frank Miller's upcoming movie is also using as it's core text) -- bears out that this is all it took for Cooke to bore right to the core of not just the character of The Spirit but of the spirit of the noir sensibility itself.  Through his masterful employment of Eisner's late style (which Eisner himself used to portray the past; i.e. his own childhood during the depression out of which so many heroes emerged to collectively shake the country out of its torpor) in conjunction with his own, Cooke has managed to delineate how the fatalistic noir sensibility is connected to a personal feeling of discontinuity, particularly the sense of disconnection with childhood self:  the "paradise lost" that Denny Colt's pre-sexual relationship with Sand represented.  It is the trauma of sexualization (that is metaphorically represented in The Spirit #12 -- as it is in so many other myths -- by the death of the father) that separates childhood from adulthood and it is the "something" that is lost at that moment that the hero (here, The Spirit) is forever trying to recapture; but these attempts are always failures and it is the final resignation to the permanence of this "failure" to regain the "paradise" of unsexualized childhood that colors the noir sensibility.  This quest to capture the sense of childhood innocence is amplified by the choice of medium: the fact of the story being told in comic book form implicitly links it to the very childhood innocence that the comic book symbolizes and so transforms this issue into a near perfect symbol of Paradise Lost.  The Spirit #12 is not just a tough act to follow, it's impossible.