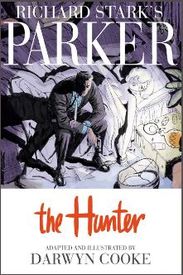 OK, technically the title is, Richard Stark's Parker in "The Hunter," and it is not really by, but is rather adapted and illustrated by, Darwyn Cooke.  And, to make matters even more complicated, for those of who don't already know, Richard Stark is really "Richard Stark," the most important  pseudonym of the famous mystery writer, Donald Westlake, who penned the original novel which Cooke here adapts.  That said, this is a new and much anticipated work by the highly esteemed Mr. Cooke, who has made quite a name for himself in the comics world – and deservedly so – over the past decade. Not everyone knows that he first dipped his toes in the comics water in the mid-1980s, but found the temperature at that time not to his liking and decided instead on a career as a graphic designer.  He later turned his sights on animation, and, finally, found his way back to comics at the turn of the century, bursting into the consciousness of the comics world with Batman: Ego.  He secured himself a place in the nascent 21st century comics pantheon in 2004 with his seminal recreation of the dawn of the Silver Age, DC: The New Frontier.  He then initiated  the revival of Will Eisner's The Spirit, taking a stunning eleven-issue turn which showed him pointed in the direction that led him here to this graphic adaptation of the classic crime series featuring Parker.  He is not the sort fellow you'd like to meet in the flesh, but on the page is a different matter.  Cooke captures it all in bold brash brushstrokes that produce a two-toned cocktail that is one part Toth and one part Kirby, well shaken.  Cooke's graphic savoir faire shines once again as he visually replicates Westlake's measured sentences and clipped dialogue in page after page of fine comics which place the reader right in Parker's shoes, and will have you believing it's 1962 in no time, for better and for worse.  Parker is a cypher for the pent up male rage that was in strong supply during those years leading up to 1964 (and seems, evidently, to be making a bit of a comeboack as of late) after which the gradual change in social mores created new – or, at least, newly acceptable – avenues of release.

This item belongs to the categories: Graphic Novel
This item is part of the series: Parker
You may also enjoy these related titles: