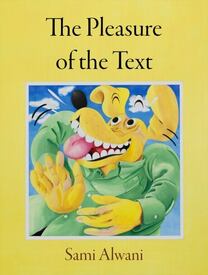 The clear nod to the seminal work by Roland Barthes in the choice of title (taking it as far as to also “quote" its cover color and font; nice touch) will inform knowing readers that this is a work of ambition and that attention will need to be paid in order to experience all it has to offer.  Each of the many pieces collected here – representing the bulk of Alwani’s comics output over roughly the last five years – contains multiple layers of signification below the surface.  And, while, of course, Alwani plainly wants to confront readers with the reality of a gay sexuality and sex between men, he also obviously doesn’t want readers to stop there.  These stories work hard and work well to situate sexuality in culture and society, to relate personal lives to professional lives, to connect individual needs and wants to life events that may have triggered them, and, ultimately, to delineate a relationship between states of mind and the nation state itself.

Employing a graphic toolkit that, while informed to varying degrees by that of fellow Torontonians Patrick Kyle and Michael DeForge, is clearly his own, Alwani successfully conveys emotional registers through both line and composition – as well as color, in those instances when it is employed.  He does so, in part, by intermingling the inner and outer lives of his stories' protagonists – who are, most often, to varying degrees, stand-ins for himself (despite, more often than not, being depicted as a dog).  These characters’ names' slight difference from his own – Simmie Antlflick, Sunny Balwani, Saehmeh the Dog, Sami/Baby – registering both the awareness that these characters are not, in actuality, him (cannot sufficiently embody him) at the same time as, on the other side of the mirror, revealing that he does not feel entirely comfortable wholly identifying himself with his own name, as printed on the book jacket, recognizing that it is illusory, if not deceptive, to consider that a name can fully represent anyone's actual identity.  (This could also be related to the fact that any representation of his given name employing the Latin alphabet remains a transliteration of the original Arabic from which it is ultimately derived.)

While the majority of these pieces were previously (mostly self-) published – including his breakthrough work, “The Dead Father,” which went on to be selected for the 2017 volume of Best American Comics, and Copacetic fave, “The Idiot” along with many others – there are several major new pieces here that are among his most substantial, including two which, along with the aforementioned “The Idiot” and the also previously published “Persona”, have been given – intriguingly ironic – referential titles: “American Psycho” and “Atrocity Exhibition”.  Perhaps (or, perhaps not) taking a page out of Kathy Acker’s playbook, these titles add yet another layer to the dense signification that is Alwani’s trademark.

And, finally, amidst and intermingled with all this challenge and confrontation there is also a humane and empathic display of human wants and needs, along with the emotions that both their denial and fulfillment bring.   Sami Alwani’s Pleasure of the Text is a unique, challenging and rewarding volume.  And you don’t have to take just our word for it.  Some real comics heavyweights have have enthused about it, as well:

“Sami Alwani is the quintessential cartoonist of the interregnum. – this period of flux between the collapse of capitalism and the rise of something else.  “The Dead Father,” and his other stories describe in fascinating detail the heartbreaking struggles of a young cartoonist in search of professional and social status in the midst of a broken culture. I hope that readers will recognize his bravery.” – Ben Katchor

“I love Sami Alwani’s style, his tender flat hysteria, and his naked honesty.  And the way he depicts queerness is so reoved from the cuddly rainbow-tinged pop culture – it’s beautiful and raw, and very very real.” – Roman Muradov

“Alwani is one of, if not THE most exciting new practitioners of alternative comic art.  This is an essential collection of vibrant, exploratory, modern cartooning.  Much to meditate on.” – Simon Hanselmann

This item belongs to the categories: Collections, Copacetic Select, Graphic Novel
You may also enjoy these related titles: