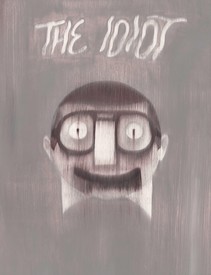 When despair hits, when ennui gets you down, it's art to the rescue... or not.  Drawn employing an extreme clear line style throughout, in an unvarying 12-square-panel grid, in The Idiot  it is the art itself that is the ultimate embodiment (reflection?) of the central theme of the work, that of a detached, machine-like process of art creation.  Alwani, in so doing, has created a comics fable of Marx's dictum of the worker being alienated from their own labor under capitalism.  Alwani's protagonist artist struggles to reclaim his connection to his self and to regain control of the direction of his being... but is this even possible?

Yes, you can read this entire work online (here, if you must know), but that's not really the same, is it? And won't doing so further the reader's (you, perhaps, in this instance) alienation from their own self, by submitting to the über-capitalism of the increasingly omnipotent digital realm?  Whereas, by purchasing the physical work, the reader (again, perhaps, you) connects with the artist (by a mere one degree of separation, should you purchase it from Copacetic, as we received our copies directly from Alwani) and the physical world you both inhabit?

Think about it... and decide for yourself.

The Pleasure of the Text