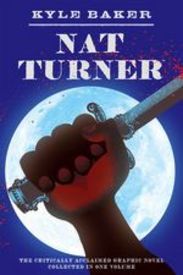 Mister Baker, perhaps the funniest cartoonist alive, steps out of his clown shoes and puts on his severest suit and tie to deliver this sermon of repression and defiance, violence and vengeance, and struggle and sacrifice, in this synecdochical story of slavery in these United States.  Reading this book, in which the narrative is advanced almost entirely in images (pantomime style) interspersed with excerpts from The Confessions of Nat Turner, it is impossible not to marvel at the strength of Baker's storytelling.  And, there is a method to the madness of attempting to relate so complex a tale entirely in images.  It captures the forced silence of the lives of the slaves it chronicles, a silence that was doubled by the forced illiteracy imposed by the slave owners.  It was exactly this imposed silence that Nat Turner intuited was at the root of the condition that he felt called upon to rise up against and destroy.  Thus the interspersed text stands as the beacon that Turner meant it to be, and when the long silence of the narrative is punctuated by a lone cry, it takes on both an urgency and a poignancy as a result of its standing alone.  Here's a hefty preview that might take a moment or two to load, but rest assured your patience will be amply rewarded.  As will any purchaser of this elegantly produced (and quite reasonably priced) 208 page softcover edition.  The character of Nat Turner is one of the fiercest embodiments of anger on the American historical register, and Baker's depiction doesn't hold back, revealing a wellspring of anger in Baker's soul.  That he has both chosen and managed to channel this anger into a successful career based on making people laugh is a testament to his character and a powerful demonstration of the truth embedded in the old adage, "Laughter is the best medicine."

This book has been reprinted in a new edition with a retail price of $18.95.  We still have a (very) few copies of the original edition.

Birth of A Nation

The Bakers:&nbsp; Babies and Kittens