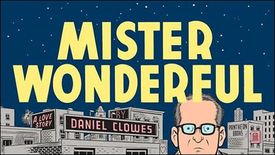 It's been so long since this was serialized in the New York Times, that we'll bet some of you had forgotten about it – but that's all part of the master plan.  This laminated, horizontally formatted hardcover just released by the industry leading Graphic Novel division of the eminent Pantheon imprint of the storied Knopf Doubleday publishing group of that pillar of publication, Random House, Inc., a wholly owned subsidiary of Bertelsmann AG, is simply the next step in the inevitable domination of the globe by Daniel Gillespie Clowes.  By insinuating himself at the lowliest point in the media food chain, Clowes has, with this aptly named work, been able to surreptitiously release a virus of comics irony that will slowly but surely work its way up to the top, wherein it will catalyze a linguistically encoded polymerase chain reaction that will initiate a resequencing of heretofore normative power relations the end result of which will be a catapulting of comics to its rightful place at the center of the palace of wisdom, with Clowes himself firmly ensconced on the throne.  So, if you want to find a place for yourself in this coming new world order, you are hereby advised to purchase and study this essential tome.

This item belongs to the categories: Graphic Novel, Gift Catalogue, Special Sale
You may also enjoy these related titles: