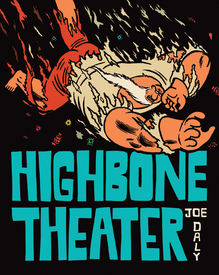 An epic, hallucinatory journey that while physically set in South Africa, embarks from a place of alienation and detachment and travels through dark and confusing psychological spaces – often via the use of various psychoactive drugs – to arrive at an unexpected series of destinations, Highbone Theater provides a comics trip like no other to any reader adventurous enough to climb aboard.  Imagine, if you will, a very Charles Burnsian narrative in which dream and reality, imagination and perception, delusion and conception, fiction, fantasy and rumination are all inextricably bound together into an irreducible mass.  Then imagine it featuring a cast made up of The Fabulous Furry Freak Brothers reimagined as meathead bodybuilders all rendered in the manner of Burns imitating Fletcher Hanks, with the setting -- landscapes and dreamscapes -- courtesy of  Jim Woodring.  Then imagine that the protagonist works with Reid Fleming – who has, apparently, been experimenting with hallucinogens since we last saw him, and who has transferred his skill set to work at a paper factory instead of an industrial dairy, and is now, in addition to being an over-the-top renegade, an off-the-rails paranoid delusional conspiracy theorist.  All the while keeping in mind the entire time that this story is set -- at least those parts that can be construed to take place within the physical realm -- in South Africa, yet is somehow related to the events of 9/11, and that the artwork switches back and forth between black and white and full color, as called for by the narrative.  Now you have some idea what to expect in the 570 pages of Highbone Theater, the latest and greatest work by Joe Daly, the creator of Dungeon Quest and The Red Monkey Double Happiness Book, and more.

Here's a work crazy enough for the times we now find ourselves in – and, now, thanks to a special purchase, priced low enough for those operating on reduced incomes and/or squeezed budgets.

This item belongs to the categories: Graphic Novel, International, Copacetic Select, Special Sale
You may also enjoy these related titles: