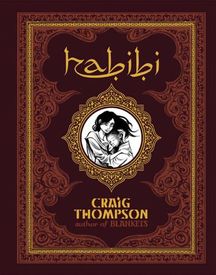 Craig Thompson's long awaited follow up to Blankets – one of the most widely and loudly lauded graphic novels in history – is now weighing heavily on the shelves here at Copacetic.  A sprawling, multi-layered, multi-faceted, multi-pronged work, Habibi is part history lesson, part tutorial, part travelogue, part anthro/socio/psychological study, part sermon, and all love story.  Thompson clearly had outsized ambitions for this work, likely necessitated by the high  expectations surrounding any follow up to Blankets.  It's always an additional challenge for creators to follow up a highly praised work.  Should they try to compete with their big hit? should they use this moment of high regard to do their secret project that they had always wanted to do, but could never hope to get green lighted before? or should they just pretend that nothing's changed and just do what comes naturally?  In the creation of Habibi, it seems that Thompson took all three approaches and melded them into an organic whole.  In other words:  Habibi tries to have it all and do it all; at times it seems that its contents may overflow.

So much is going on in this work, that even its 674 pages sometimes don't seem enough to contain it.  One result is that any appreciation of Habibi must come accompanied by a caveat concerning its verisimilitude to the reality on the ground in the region of the world that it depicts.  Likely inspired by Thompson's travels through Morocco during the spring of 2004 – documented (on pages 30 through 116) in his engaging comics travelogue Carnet de Voyage – Habibi takes its readers on a trip of their own through the pen and ink world of Wanatolia, which appears to be an amalgam of Muslim Arabia and North Africa.  This setting is clearly laid out at the start as being a fictional/mythical locale.  Wanatolia appears, at least at times, to be clearly intended as a stand-in for a contemporary Arab nation or city-state.  At other times, however, it appears to present a pre-WWII reality, and at others still, it feels as though the setting could be the 19th century, or even earlier!  As a result, the more-than-occasional anachronistic representations of the putatively contemporary setting may leave the reader feeling that temporality has been collapsed and that all eras exist at once – and this may very well have been Thompson's intention.  The world of Habibi is one where myth, legend and reality are blended together in an intoxicating panorama.

Especially impressive is Thompson's visual schema for binding and integrating all these various strands into one magisterial whole.  The very design and construction of the physical book is made itself a part of the narrative in a unique and compelling manner.  The structure of the book, and in particular its division into a "magic square" composed of nine numbers each with its corresponding Arabic letter which in turn corresponds to one of the book's nine chapters, is integral to the structure of the story it holds, and, ultimately, the meaning, of the work itself, in an amazing melding of form and content.  Thompson strikes us as being the sort of artist who is always trying to outdo himself, to see just how far he can take his skills.  Here he proves himself to be astonishingly adept – for someone with no previous background – at both Arabic calligraphy and the intricate geometrical patterns of classical Islamic art.  He employs both to great effect in creating the overall atmosphere of the work.  And then there are the numerous quotations of and references to classical western artists, among whom we spotted Michelangelo, Ingres, Manet and a few others we couldn't immediately place (Renoir? Bonnard?).  It's quite plain that Craig Thompson has an enormous talent and an ambition to match.  There is an abundance of stunning drawing in Habibi, and there's simply no denying the reading pleasure to be had by anyone who enjoys good drawing.  Take a tour through some sample pages, while gaining the rare chance to see their various stages leading up to the final result, thereby gaining some insight into Thompson's working method, at the "process" gallery on the HabibiBook site.

On the comics history level, as we have intimated before, it is our belief that no one has more assiduously studied Will Eisner's mature work – from A Contract With God through to The Protocols of the Elders of Zion – than Craig Thompson, and no one is more qualified to be considered his artistic heir.  From the distinct moral flavor of the storyline, the sprawling canvas of the narrative, the polyglot, urban settings, to the placement of blacks, the use of shadow and the employment of body language and facial expression to convey emotional states of the characters, Thompson continually shows an affinity to Eisner.  Intriguingly, while Eisner's mature work often focused on the lives, beliefs, habits and history of Jews and Judaism with a look back at the Old Testament for inspiration, Thompson has focused on his own Christian roots in Blankets, and now, with Habibi, has created a work with Islam and the Qur'an at its core.  Thus Thompson's choice of subject matter also reflects on his relationship with Eisner's work in that both Christianity and Islam have their roots in Judaism.

At the core of Habibi is a war between sensuality and spirituality, that is played out through the lives of its two main protagonists, Dodola and Zam.  Depictions of wanton sexual abandon, prostitution, rape, sex slavery, transgendered sexuality and more – none, it should be noted, deserving of more than an R-rating – are contrasted with an abundance of illustrated excerpts of a variety of sutras from the Qur'an – several involving Old Testament figures such as Abraham and Noah, and some involving the difficult challenge of how to visually represent The Prophet – along with a sprinkling of Hadiths, and a wide range of folk tales and legends from the Arab world.  In addition there are numerous philosophical and metaphysical asides, along with a few numerological explorations, that taken together provide some idea of the mathematical and alchemical thought forged during the golden age of Islamic empire.

It is this very split that animates the entire work: respectful traditional spirituality and indulgent irresistible sensuality.  Thompson makes this divide plainly obvious in his use of angels and devils within the story.  It is worth noting that this split also plays out in the concrete physical realm in a very deliberate contrast between the opulence of wealth and the squalor of poverty, with a special focus on the horrible environmental degradation that accompanies urban development.  In a sense, Habibi can be seen as continuing the internal conflict that Thompson grappled with in Blankets, when he recounted in fictional form his own youthful wrestling between his inculcated spirituality and his burgeoning sexuality.  In Habibi it appears that he has decided and/or needed to project this struggle on to an "other" in order to so fully delve into it.  This necessitates on the reader's part a questioning of Thompson's treatment of the core themes vis á vis his employment of Arab culture and the Muslim religion to do so.  While, on the one hand, for someone raised in a fundamentalist Christian home, he has clearly taken great pains to demonstrate care and respect for Islam, on the other, it can be said that he has also gone out of his way to present quite a bit of sensational and salacious material, and it's likely that followers of Edward Said will accuse Thompson of, at the very least, an unconscious Orientalism, despite the narrative's assertion of universalism.  That said, a work as complex and multi-layered as Habibi cannot be reduced to any simple category or be defined by any preexistent label:  it is throwing out the baby with the bathwater to write it off as being simply Orientalist.  The real test in this regard will be to see how Habibi is received in the part of the world it putatively depicts.   Will readers in the Middle East see themselves and their history in Habibi, or will they instead see the Occident imposing its warped views upon them?  Likely it will be a little bit of both.  We'll have to wait and see...

At the end of the day, what we have in Habibi is the fruit of six year's of labor by one of today's top talents, who has striven to deliver a message of tolerance, environmental awareness and love.