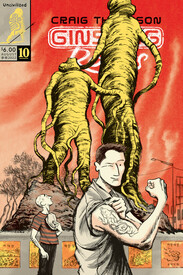 It's here, hot off the press!  And... it's another fantastic issue!  This issue has a bit of a meta vibe as it goes back and delves into Craig's own feelings at the start – or, at least, early days – of the Ginseng Roots project when, it appears, that Craig was having some doubts about things.  This part includes a (fairly hilarious) vignette of his (briefly) entertaining Hollywood dreams – before recruiting his brother, Phil to accompany him on a "road" trip to Korea – where he receives much encouragement and inspiration, and takes readers along for inside looks at both Korean comics publishing and Korean ginseng farming, processing and trade.  The issue finished up with Craig and Phil arriving in China together, but then splitting up to head their separate ways in #11.  Can't wait!

This item is part of the series: Ginseng Roots
You may also enjoy these related titles: