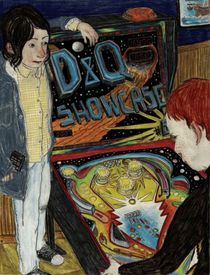 Yes, it's another fine volume from the most internationally oriented of the North American publishers, D & Q.  This time around we have a special Scandinavian focus, with two of the three comics works originating in the somber lands of the midnight sun.

A melancholy northern mood pervades the entire collection, including its centerpiece, the contribution of the lone North American, T. Edward Bak. The Partisan -- his first fully developed work since Service Industry, the work for which he is best known --  is a complex multi-layered work that (or, at least, so it seems to us) seeks to expiate regret connected to a failed relationship, one in which it was realized too late that the priorities in the relationship weren't what they should have been.  Bak's artwork continues to be inventive and varied, employing bold scratchboard as well as pen and ink and delicate watercolors, each chosen to best express the needs of each particular aspect of the tale.

Preceding The Partisan, is the collection opener, Inland by Anneli Furmark.  This piece is built upon a series of subtle revelations that create a gradual portrait of a set of interlinked relationships.  A deliberate, minimal palette color-codes the action which unfolds in an efficient sequence that establishes a complex interplay of personalities with surprisingly little exposition.

And, finally, there is the grande final, the untitled piece by Amanda Vähämäki.   Born in Tampere, Finland in 1981, Vähämäki has a true gift when it comes to color.  Her keen observation is matched by her finely tuned execution.  It is our considered opinion that never before in the history of comics has the nuances of the widely varying shades in which the sky above appears been better captured than here in this story; all rendered with colored pencils, no less.  It is a highly imaginative tale of a pair of adolescents carving out a new, private world for themselves amidst the public, old world around them.  And while we can't help but focus our praise on Amanda's amazing color-centric talent, this should in no way be interpreted as any sort of slight against any of her other skills.  The characterization on display is quite strong, both in the narrative development and in the physical renderings.  There is a nearly seamless visual integration of the characters into their surroundings that functions on a narrative level as well.  This piece is simply a pleasure to behold.  You will find yourself going back to its pages again and again to bask in their beauty.

This item belongs to the categories: Copacetic Select, Anthologies, International
You may also enjoy these related titles: 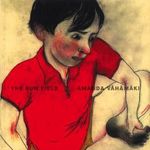 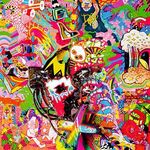