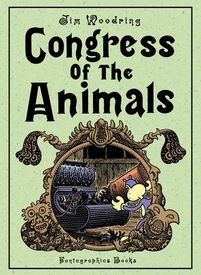 Congress of the Animals
Jim Woodring
published by Fantagraphics

Here it is:  an all-new wordless graphic novel featuring Frank!  This 104 page hardcover is in the same format as 2009's Weathercraft, which was, in 2010, the first ever wordless novel to receive The Stranger Genius Award for literature.  Congress of the Animals takes long time readers (and everyone else, for that matter) into uncharted territory when Frank departs the realm of The Unifactor, "the closed system of moral algebra into which he was born" and which controlled his existence... until now!  This new work propels Frank into a new world where he meets Quacky and sails on through a series of enigmatic scenarios that we feel comfortable labeling "Woodringian."  All lushly penned in ink employing Woodring's inimitable cartoon language, this book is a work that will reward repeated readings.  Bonus Fact:  Congress of Animals has a great full wraparound image printed directly on the hardcover itself that is a real treat (and that far surpasses the dustjacket image printed at left).

This item belongs to the categories: Graphic Novel, Pantomime Comics
You may also enjoy these related titles:

And Now, Sir – Is This Your Missing Gonad?

Frank in the 3rd Dimension

The Treasury of Mini Comics