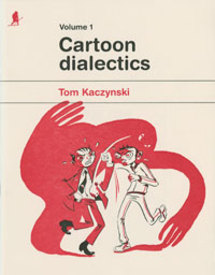 The two volumes of Cartoon Dialectics – which are digest size and 24 pages and 32 pages respectively – while collecting much of Kaczynski's work for anthologies (other than MOME) and periodicals, some in color and nearly all dated from 2005-2010, also reveal his roots in the communist east – perhaps moreso by their titles than by their contents – and so also serve to remind readers of the strong philosophical roots of Marxism.  Catch up with Tom K. at his blog, trans atlantis.

This item belongs to the categories: Small Press Comics, Collections, Handmade
This item is part of the series: Cartoon Dialectics
You may also enjoy these related titles: