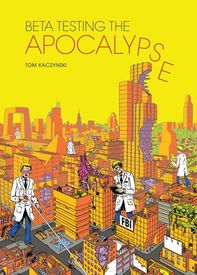 Here they are, at last under one cover: the tales of extreme alienation and deeply seated paranoia, of emotions replaced by systems and humanity crushed by its own technology, all leading to the inevitable crumbling of civilization, that ran in MOME between 2007 and 2011, including the masterful "Million Year Boom," about which we enthused on the occasion of its original release in MOME 11, "(It) will knock your socks off.  It is probably the first wholly successful translation of the Ballardian (as in J.G. Ballard) narrative approach to science fiction yet achieved in comics form.  This deeply creepy tale brings us face to face with a world where major corporate leaders so deeply internalize their own marketing messages and stock market hype that they become untethered from consensus reality and move into the ambiguous landscapes of delusion, paranoia and insanity that were so successfully mined by Ballard (and, to be fair, by many others, most notably Philip K Dick; but none so well as Ballard, who is most convincingly evoked here).  While the influence of Clowes is certainly evident in Kaczynski's work, he has created a wholly original synthesis here."  But wait, there's more!  Beta Testing the Apocalypse also contains the previously unpublished – and thus aptly titled – "The New," a 32 page epoch spanning epic that might be Kaczynski's most ambitious tale yet.  This flexi-cover volume then concludes with an intriguingly detailed index of the people, places, subjects, objects, themes and concepts it contains, which should serve to inspire readers to dive right back in and revisit the works in a fresh light.

This item belongs to the categories: Collections, Copacetic Select
You may also enjoy these related titles: