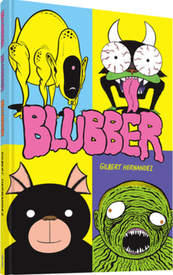 OK, here it is:  the complete Blubber!  This hardcover edition collects the entirety of Gilbert Hernandez's completely over-the-top six-issue comic book series that was originally published between 2015 and 2020.  We imagine most frequenters of this space have an inkling of what's between these covers, but for the uninitiated, let us just say that this series employs an extreme close-up look at sexual activities – and an even more extreme sense of the absurd.  Starting out with a series of alternative, (literally) alien sexualities, featuring ways of sex previously unseen and, perhaps, previously unimagined, as well.  These alien activities gradually, over the course of the six issue series, blend, transition and morph into a panoply of human sexual activities.  This approach serves to push readers (most, anyway) away from of any sort of pornographic comfort zone they may have previously entertained and engenders a sort of alienation from received notions concerning sex.

It can be a liberating experience.  It can be fun.  It's definitely comics!

Not for the faint of heart (also NOT for anyone under 21 years of age).