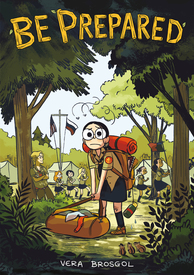 Finally, something new from Vera Brosgol!  Her Anya's Ghost has been a mainstay of the Copacetic comics for younger readers shelf since its 2011 release. Now we have Be Prepared, her memoir of being nine (almost ten!) years old at (a Russian Orthodox) summer camp.  256 duo-toned (in green, naturally; by Alec Longstreth, no less) pages filled with the challenges that come with the territory of being different – and thus often excluded; of being an immigrant transplant in America.  Readers will bond with Vera as she works to overcome obstacles as well as her feelings of awkwardness and assert herself and her talents.  Just in time for summer!

This item belongs to the categories: Gift Catalogue, Graphic Novel, Kid Friendly
You may also enjoy these related titles: