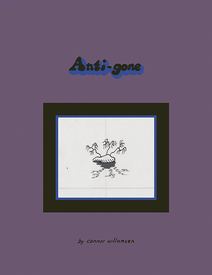 An all-new work by Connor Willumsen!

Sayeth Koyama:  " Join an oneiric odyssey through a slacker second life.  Reality’s grip is loosened as Spyda and Lynxa explore a potentially constructed environment that shifts between dystopic future and constructed virtual present. Like a form of multistable perceptual phenomena, Anti-Gone exists in ambiguity."

Since its release Anti-Gone has garnered quite a bit of press.  Here's a sampling:

"Readers who enjoy the boundary-pushing work of cartoonists such as Dash Shaw and Olivier Schrauwen will freely surrender to Willumsen's equally dreamlike world." -- Publishers Weekly

"Connor Willumsen is a blackbelt of formalism in comics. There is an unending sense of "thinking" in this book. Every angle and every option is considered." -- Caleb Orecchio, Comics Workbook

"All the big questions are here, essentially, if you give enough of your attention to see them there: The book demands, and rewards, giving it all you have." -- Brian Nicholson, Longbox Coffin

"From beginning to end, Willumsen pushes you in the deep end and forces you to tread over adroit uncertainty, using water as a stand-in for not only the fragile nature of nostalgia and relationships, but your very own mind. Anti-Gone is about all these things. At least I think so." -- RJ Casey, The Comics Journal

"Connor Willumsen's first graphic novel, Anti-Gone, beautifully follows a couple who drift on a small boat and go see a movie on drugs. It felt to me a bit like a Tao Lin novel in that it focuses on young people who spend their time shopping for clothes and entertainment/drugs." -- Dash Shaw, The Comics Journal

"Illustrated with a virtuoso command of pose and movement, with imaginative and surreal flourishes throughout, Anti-Gone is one of the year's most impressive releases." -- Gosh! Comics

"With beautiful line art, Willumsen tells one of the oddest stories of the year, but also one of the most visually compelling and formally striking." -- Shea Hennum, The A.V. Club

"You get an odd combination of super contemporary, minimalist, and economical cartooning - the sort of artistic sensibility you expect from a young author, but with a maturity of voice suggesting a master playwright or screenwriter." -- Peter Birkemoe, Quill & Quire

"Willumsen's fantasy involves two tourists, Spyda and Lynxa, who explore an island that turns into a futuristic city or an apocalyptic nightmare depending on what drugs they're taking." -- Heidi MacDonald, The Comics Beat

"Willumsen's book demands that you spend time looking at it from multiple angles, then trusts you to make up your own mind." -- Ryan Carey, Daily Grindhouse

" Anti-Gone is likely one of the strongest long-form formalist comics published this year. Willumsen's pages made me gasp, and flinch, and read and re-read, and re-read." -- Alex Hoffman, Sequential State

"Book of the year for me, and probably an absolute game-changer for a generation of cartoonists about to emerge" -- Brian Nicholson, The Comics Journal

"But the beauty of comics, by virtue of their immersive nature, is that you're sometimes forced to see things in a different way. And in Anti-Gone, that's what Connor Willumsen does in spades." -- Tom Murphy, Broken Frontier

And, lastly, from right here in Pittsburgh: "With this book Connor has really made the reader--with the dialogue, with the cartooning, with the sequencing--free to explore this space, and it's just amazing to read." -- Sam Ombiri, Comics Workbook (Read the entirety of Sam's review on Comics Workbook, HERE.)

We are now out of stock on this, and it is currently unavailable in the USA.  It is possible that it has gone out of print, but we believe there still may be copies somewhere (perhaps in Canada).  We will try to track some down, so please check back...

This item belongs to the categories: Copacetic Select, Graphic Novel, Small Press Comics
You may also enjoy these related titles: