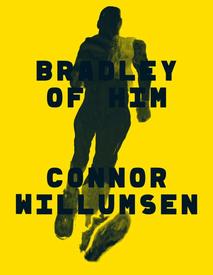 In Bradley of Him, Connor Willumsen crosses into Cronenberg territory, where the object/subject divide disappears, objectivity becomes indistinguishable from subjectivity and delusion is real - to exceptional effect.  Consumer capitalist consciousness is turned inside-out – in page after page of spectacular, groundbreaking comics – to reveal an America in which it is viable to have consensus reality erased and supplanted by a pre-fabricated identity made in Hollywood (and on sale in Las Vegas), enabling one to star in a movie of their own life rather than live it.  Of course, there is a heavy price to pay for this life of illusion (although there is a Faustian bargain available), and Bradley of Him breaks out the cost structure – not just to the individual involved, but to the containing society as well – in great detail in this tour de force graphic novel.