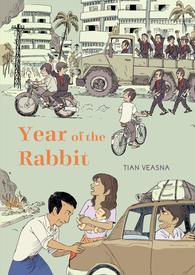 Year of the Rabbit is an effective and affecting memoir of life in Cambodia under the Khmer Rouge during the years 1975 to 1980.  While most North Americans who were alive during the Vietnam War are at least dimly aware that something bad happenned in Cambodia after American forces largely left Southeast Asia at the conclusion of the Vietnam War, few are aware of the details, or have an understanding of what life was like for Cambodians themselves after the Communist Part of Cambodia – the Khmer Rouge  – or, as readers of this book will learn, Angkar, which is how the Khmer Rouge referred to themselves during the early years of their rule – took over the country.  Those who were educated and/or members of the bourgeoisie, especially those perceived as "tainted" by outside (read: Europe and North America) influences were, overnight, deemed "enemies of the people" and dealt with by the regime with escalating brutality, up to and including summary execution.  There are umistakable parallels to what the Jews (and other persecuted minorities) of Europe experienced in those areas ruled and/or occupied by the Nazis during the years 1933 to 1945.

Veasna, whose birth nearly coincides with the Khmer Rouge takeover, spent years interviewing his extended family to gather the details that he then employed to create this work.  Running close to 400 pages in total, Year of the Rabbit manages transform the story of his family's experiences into a gripping and harrowing portrait of the period, and, ultimately, manages to create an uplifting portrait of a family overcoming the odds, meeting the challenges and surviving.  This is a real achievement and an important work.  It makes this period come alive to readers today, and now, thanks to publisher, Drawn and Quarterly and translator, Helge Dascher, Anglophone readers in North America will be able to discover this work, which was originally published in France, where Veasna resides, having managed to settle there with his immediate family after escaping Cambodia.