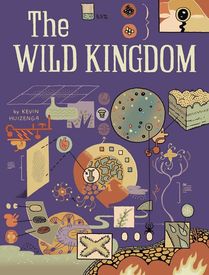 And here's another reason to get up in the morning:  a new release by Kevin H. This one is fairly convoluted in its conception and execution, but therein lies part of its appeal.  Wild Kingdom had its humble beginnings in Super Monster 12,  which was first published way back at the dawn of the millennium.  This material was then bolstered and slightly reconfigured for the February 2006 release of the fourth issue of Or Else, his since discontinued Drawn & Quarterly series.  And now, with Wild Kingdom, the material at last receives its apotheosis.  The core meaning of Wild Kingdom is surrounded by a dense underbrush of irony that must be overcome by the reader.  In addition, a multiplicity of signification strategies are employed that may throw careless readers off the scent.  Only those capable of sustained, dedicated tracking will be able to bag the prize at the center of Wild Kingdom.  Get a head start, here.

In The Wild Kingdom, Huizenga is, basically, "messing with your head."  The central thesis of this work is a questioning of the basic assumptions underlying the authority of knowledge as it is presented in our society.  We suspect that this has been motivated by a personal frustration at the lazy, uncritical acceptance of the presentation of "facts" (see Huizenga, Zettwoch and Ted May's ongoing series Amazing Facts with Leon Beyond, for more in this particular vein) by too large a swath of the American public.  The book is constructed in such a way as to force any reader who is even remotely paying attention to stop and ask, "Hey, wait a minute: what's going on here?"  Huizenga has masterfully manipulated what Kevin Jackson has termed the "invisible forms" of literary production that predispose our perceptions of a work's contents before we even get to it and without us fully being aware of them or their affect on us (Jackson, Kevin. Invisible Forms. New York, NY: St. Martin's. 2000. Print).  Back cover blurbs, table of contents, index, bibliography, preface and introduction:  all are ironically employed in Wild Kingdom to put the reader on alert  that things are not what they seem.   By co-opting the forms and language that we associate with the authoritative presentation of objective knowledge and facts, and using it instead to present an obviously subjective non-standard viewpoint, Huizenga prompts us to question our blithe acceptance of the status quo presentation of the "facts on the ground"; of scientific "facts" as representing actual reality; and, most clearly and obviously, of mass media representations of our lives and our world – most specifically (and egregiously) those of advertising – as a substitute for actual experience.  Huizenga asks that we step back and awaken to the reality that much of what we take for the truth about our world is little more that arbitrary sign systems that are being deliberately manipulated for gain by commercial enterprises and that the reason we are not noticing this is that the reach of global media enterprise is so all-pervasive at this point that a majority of Americans  – as well as an ever growing minority of the rest of the world – spend more time interacting with artificial representations of nature than with nature itself, and are at this point acculturated to perceiving the artificial as real and so have difficulty discerning distinctions between the two and as a result are increasingly subject to  being remotely controlled.

The jarring juxtapositions and clashing conflations that result from this are preceisely the point – things are, truly, NOT what they seem, and the sooner we wake up to this, the better.