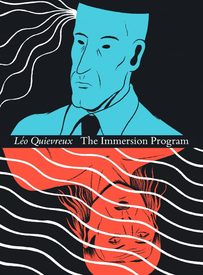 This science fiction noir by Léo Quievreux features page after page of dark, angular, moody, high contrast black and white art that looks a bit like it could have been executed by a sophisticated AI based on an algorithmically derived hybrid of Charles Burns and Eric Haven.  Originally released in France, it has an unmistakable European feel despite its arguably American theme of techno-paranoia.  Here in these 160 A4 size pages, readers will be taken on a journey through a technological meta-mind where tracking takes place through – and in –  a "playback" of memories that can be coordinated spatially as well as temporally through a new piece of technology dubbed the EP-1, which is itself the center of the plot, making for a labyrinthian story structure.  Now available in an English translation by François Vigneault courtesy of the adventuous publishing arm of Portland, Oregon's Floating World Comics. Definitely worth a look.