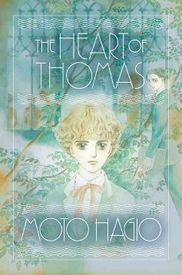 The Heart of Thomas
Moto Hagio
published by Fantagraphics

Taking place in the semi-fantastic setting of "a German boys' boarding school sometime in the mid-20th Century", The Heart of Thomas is a complex tale of love between boys that starts right off with the suicide of the titular character.  This massive 524 page shojo epic from one of the founding mothers of the genre was originally serialized in the pages of Shojo Comicsover the entirety of 1974, and then went on to be collected in a successful series of trade paperbacks that were the recipients of widespread interest and acclaim.  Arguably the first fully realized, multi-levelled, novel length work in the shojo genre, The Heart of Thomas had a transformative impact on the form.  It now finally receives it's first authorized English translation (by Matt Thorn) in this hefty hardcover edition from Fantagraphics.