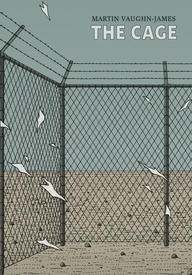 When we learned that New York Review Comics was planning a new edition of two of Vaughn-James's other major works from the 1970s (Elephant and The Projector), we felt it was high time to bring this work, which we've been selling the shop for quite awhile (whenever we can get our hands on some copies!), to the attention of our online customers.  Originally published in 1975, as a hardcover edition of 1500 copies by Toronto's Coach House Press, The Cage was reissued in 2013, again by Coach House, in a softcover edition.  Vaughn-James had a unique approach to, as well as a clearly prescient vision of, long form visually-centered narrative.  Among his peers working in the 1970s, only Moebius, along with, but to a lesser degree, Victor Moscoso and Rick Griffin are comparable; and even then Vaughn-James is more or less in his own world.  Aspects of his approach to comics making presages that of work being undertaken here in the 21st century by comics makers as diverse as John Hankiewicz, Anders Nilsen adn Hans Rickheit, as well as informing the work of many others.

To give you an idea of what's in store, we've posted a few spreads on the Copacetic Instagram, here.

Here are some additional details from the publisher:

Brief Description:  First published in 1975, this work foreshadowed the rise of the graphic novel. While promoted by insiders in the years that followed, it is not well-known. Its relative obscurity may be due to the late Vaughn-James's devotion to his highly personal vision. Presented here are a series of black-and-white drawings, nearly clinical in their precision, detailing an enigmatic structure in an unspecified place and time. Accompanying the illustrations are bits of text, which are perhaps explicative in their unseen whole but as fragments offer only tantalizing hints of possible unity. Nonlinear in its approach to both space and time, the study mixes the banally familiar with the disturbingly alien. What emerges is not comprehensible in any mundane sense, but it presents enough of an illusion of a greater whole lurking just out of frame to be addictively engaging. It is a masterpiece, demonstrating a level of skill and insight very few have even aspired to in the nearly 40 years since its initial publication

Biographical Note:  Martin Vaughn-James (1943-2009) was a painter and groundbreaking comics artist who published three of his early works with Coach House Press: The Projector (1971), The Park (1972) and The Cage (1975). He was born in England and spent much of his youth in Australia, before moving to Canada to do his groundbreaking comics work in the 1970s. Vaughn-James is widely recognized as a pioneer in the development of the graphic novel. Later in life, Vaughn-James moved to Belgium, where he focused on painting. His works were the subject of several personal exhibitions in Brussels and Paris. Vaughn-James also published two works of prose fiction: Night Train (1989) and The Tomb of Zwaab (1991).

Please take a moment to check out this preview provided by the publisher (you'll need to scroll through the title and credit pages to get to it).