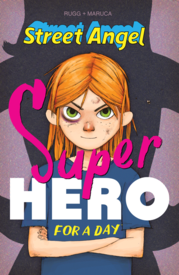 Street Angel: Superhero For a Day is the first volume in the ongoing Image Comics series of original Street Angel adventures to have been created in its entirety specifically for the oversize hardcover format in which this series has been published, and it shows.  The artwork in this volume displays levels of both subtle nuance and brash abrasiveness that exceeds that of the prior two volumes.  Rugg uses the larger canvas and higher resolution printing that comes with this format to take chances, engage in a large number of formal experiments, and just plain have fun!  Cartoonists, comics makers and illustrators who take the time will find plenty of innovative approaches to the medium on display here that can – and will! – inspire and inform their own practices.

Taking a critical perspective on the text, it is worth pointing out that within the pictorial diegesis there appears an intriguing correlation between wealth and (super) power.  After the introduction of the super hero motif, a transition occurs:  the setting shifts – is, on the picture plane, ripped – from the garbage strewn and heavily graffitied environs of Wilksboro – which have been largely rendered so as to appear to have been drawn on and/or composed of an assemblage of corrogated cardboard, accentuating the sense of impoverishment – first to an interegnum set against a clear blue sky out of which emerges Captain Alpha who "saves the day", and then to that of a gleaming, skyscraper-filled metropolis.  This subtle but unmistakable shift registers on the reader in such a way as to point towards an obvious power imbalance that exists between the office complex and the streets; the narrative further ties (masculine) sexual aggression to the ability to leverage this power imbalance to serve one's own ends; and so here implicates the superhero in representing – as a symbol/cypher – the power of wealth and a resulting inequality, indicating a corruption of the original symbolic associations that adhered to the superhero as a champion of the common man (and woman).  Perhaps this shift can be read as a result of the corporatization of superheroes, as they are now, for the most part, owned by transnational global media empires (DC = TimeWarner; Marvel = Disney).  Regardless, this is just one of the many layers available to perceptive readers who take their time unpacking this text.

Bonus features this time around include a "Book Club / Classroom Discussion Questions?" double-page spread – with answers provided by Street Angel and her pals (including a Jim Rugg- rendered Brian Maruca!?!) – a complete illustrated publishing history of Street Angel (including foreign editions!), and more!

This item belongs to the categories: Gift Catalogue, Graphic Novel, Made in Pittsburgh
This item is part of the series: Street Angel
You may also enjoy these related titles: