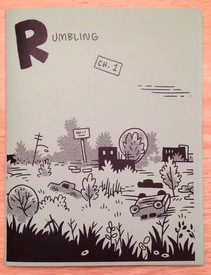 With things going as they are, Mr. Huizenga has, evidently, decided that it was a good idea to reissue the long out of print first chapter of "Rumbling," which first appeared in Or Else #5, way back in 2008, to remind us that things can still go quite a bit further south.  Here's a bit of what we had to say about it back in our original review of that issue:

...the 24-page "Rumbling," which is, according to the credits, "adapted" from the 44th of the 100 Ouroboric (very short) Novels that make up Centuria by Giorgio Manganelli (translated by Henry Martin) –  but it is probably more accurate to say that is "inspired" by it.  This story "stars" Glenn Ganges and imagines a religious war -- something along the lines of the current Sunni-Shiite conflict raging (then... and still) in Iraq -- taking place here in the good ol' USA.

This issue also includes a 5-page bonus story, "Spiders Around the House", which, along with covers and title page rounds this mini-comic out to a full 32 pages.