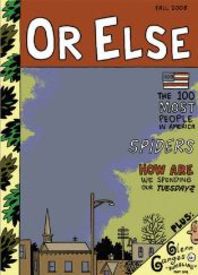 Or Else #5
Kevin Huizenga
published by Drawn and Quarterly

This issue finds Mr. Huizenga at his most archly wry.  Indeed, we'll go so far as to say that should the day dawn when there is a dictionary of comics, we are wholly confident that the first entry under "arch adj." will be Or Else #5, and that it will be followed by a note stating, "*see wry."  There is more than a smidgeon of despair on hand here as Huizenga confronts America today and does his best to translate it in to comic book form.  There seems to be a deliberate lack of focus to this issue, as though Huizenga is trying to say, "Don't kid yourself into thinking you can get a handle on it.  The world's a mess and all we can hope to do is just hold on."  The overall structure of this issue is an amalgamated parody of contemporary mainstream American print media, from The New Yorker to Time Magazine to academic journals to evangelical religious pamphlets to comic books. There are moments that we got the feeling that Huizenga was angry at himself for making comics when there is so much wrong in the world; that he was attacking himself (and even his friends) for being complicit in the mindlessness of contemporary society.  But it is precisely comics that all of us who visit this page use to help us come to grips with our surroundings, and here Huizenga is as strong as ever.  The centerpiece of this issue is the 24-page "Rumbling," which is, according to the credits, adapted from the 44th of the 100 Ouroboric (very short) Novels that make up Centuria by Giorgio Manganelli (translated by Henry Martin).  This story "stars" Glenn Ganges and imagines a religious war -- something along the lines of the current Sunni-Shiite conflict raging in Iraq -- taking place here in the good ol' USA.  It is, evidently, "2B" continued.  The most intellectually stimulating part of the issue is, "Which Sentences Are we Diagramming," which is a fascinating look into a visualization of grammar employing the language of comics.  Not to be missed!