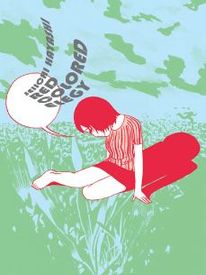 It's hard to believe that it's taken nearly forty years for this truly original, one of a kind work to finally be published in North America in English translation, but now that it has it's like a missing chapter in the history of manga has at last been found.  This work is not one than can simply be opened up a dived into, partly as a result of its late arrival, but mostly because it is such an original piece that most readers will immediately find themselves on unfamiliar ground that seems to shift beneath them as they progress through its pages.  Seiichi was clearly a cultural omnivore and he ranged far and wide indeed in gathering his inspiration for Red Colored Elegy, which he produced during 1970 and 1971, in the wake of the tumultuous cultural upheavals of the late 1960s, which, it is not widely appreciated here in the states, created as much turmoil in Japan as in America and Europe.  His visual sources range from Utamaro and Hokusai to di Chirico and Picasso to Takahama and Tatsumi, and include incorporations of Hollywood icons such as Mickey Mouse and James Dean.  We'll have to admit to finding his narrative influences to be somewhat obscure -- due to our lack of expertise in Japanese literary history.  Nevertheless, it is discernable that, as with his visual sources, there is an "East meets West" feel to the idiosyncracies of Hayashi's storytelling.  There is also a clear generational opposition to the straight forward, propulsive narratives of Tezuka, as well as an alliance with the narrative indeterminacies of the cinema of la nouvelle vague.  All this is by way of preparing you for the unique experience of reading Red Colored Elegy.  It is a work full of despair and desperation that is more than a work of fiction:  it embodies the struggle of its author to forge a way in the world; to survive the 'slings and arrows of outrageous fortune'; and, finally, to build and hold a lasting love.  How successful this work was in achieving these, we cannot say, but Red Colored Elegy most certainly left a lasting legacy that is at last being shared with American readers.  Here's an excellent preview that will give you a good idea of what we're talking about.

PLEASE NOTE:  This is now available in a new – and improved! – softcover edition, HERE.

Gold Pollen and Other Stories