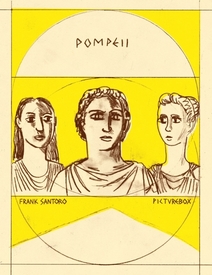 Principles derived in classical antiquity and then revived during the renaissance are given a new lease on life in comics (Renaissance II: Comics?) through the work of Frank Santoro.  The Golden Section, Dynamic Symmetry, and plenty more are all incorporated into the underlying structure of his work, and nowhere more so than here.  The complete Pompeii graphic novel premiered at this year's SPX, a year after its first chapter had appeared as a limited edition risograph at last year's SPX (and which went on to sell out in the blink of an eye).  The book's look and feel transmits an æsthetic charge even before it is opened to reveal a 144 page work, printed in a Mediterranean brown on just the right paper stock, that tells a tale that is at once ancient and modern.  At last we have the fully fleshed out vision of Santoro's long gestated meditation on the axes of art: artists and patrons; money, sex, power and love; subject and object; the eternal recurrence of archetypes; and, of course, comics and geometry.  Continuing on the same course that he set in the first chapter, Santoro here maintains and further strengthens his compositional manifesto proclaiming the centrality of "the spread" – the two pages that lay open before the reader and are simultaneously taken in as a compositional whole and scanned/read as a narrative text.  This is a work that must be carefully and deliberately studied in order to extract the multiple layers of signification and meaning that are encoded within the art.  The parallel positioning of people, places and objects within the respective grids of the left and right pages of each spread invites analogical synthesis on the part of the reader, and it is within this synthesis that the real drama unfolds.  This synthesis is facilitated by the use of rough gestural drawings throughout much of the narrative, providing a sense of immediacy to the characters' actions and giving a "living in the moment" feel to the drama that together serve to draw the reader in and so more viscerally experience the last days of Pompeii.  The ease with which we note parallels to our own times leads to pondering what may or may not lie ahead, and to wonder if there is anything any of us can do about it.

Now OUT OF PRINT.  We still have copies available.

This item belongs to the categories: Copacetic Select, Gift Catalogue, Graphic Novel, Made in Pittsburgh
You may also enjoy these related titles: