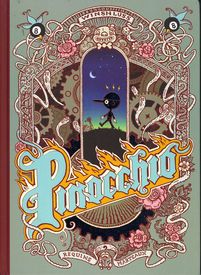 In this massive, deluxe, 188 page, full color hardcover, the classic tale of Pinocchio, originally penned by Carlo Collodi towards the close of the 19th century, gets a 21st century makeover; which, we hasten to add, renders it unsuitable for children.  Winner of the 2009 Angoulême best book of the year prize it is now published in English for the first time by Last Gasp in the US and Knockabout in the UK.  In the wake of its success, its creator, Winshluss (the pen name of French cartoonist, Vincent Paronnaud) has won many converts.  We now refer you to Ben Towle's infectiously enthusiastic write up that does its best to add you to their ranks.  Replete with illustrations and links, Towle does his best to convince you of this book's merits, which are many and various.