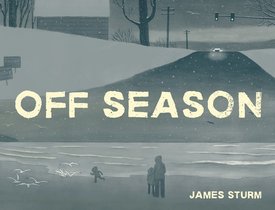 James Sturm’s latest graphic novel takes on the challenge of crafting a social realist narrative that is solidly set in the mainstream of the American novelistic tradition, and welding it to the visually expressive capacities of comics.  Centered on a married couple and extending out to include their school-age children, parents, siblings, peers, and then on to the community at large, Off Season provides a unique portrait of our times.

The classic American novelistic form provides opportunities to structurally integrate observations and commentaries on the interplay of forces that connect individual lives to the containing and sustaining society in which they take place, allowing each to be revealed in the other.  The primary axis of reflection here is of the Trump/Hillary split in the American psyche reflecting/reinforcing/extending national attitudes down into – or is up out of? – the marriage at the novel’s center.

The first thing that will strike the reader upon opening the book is, of course, Sturm’s decision to render all the characters in the book as anthropomorphic dogs.  The metaphorics  of this decision are hinted at in the narrative arc of the marriage being connected to the husband and wife’s shared hallucinogenic experiences.  Given the capacity of acid to transform one’s experience of normative/consensus/objective reality into a radically subjective/contingent sense of being, and then how this in turn reveals the fundamental mutability of our intellects’ processing and interpretation of sensory input – how something that at first seems strange and outlandish can quickly become accepted as normal – it might not be much of a leap to go from identifying yourself as a dog-person to becoming an actual dog-person, and then seeing the world around you as likewise populated.  The key here is not the fact that the people are dogs, but that what constitutes human identity is highly mutable and in a constant state of flux.   Representing the alterations of consciousness effected by technological advances and shifts in the political landscape is a very difficult task. The radical step of having people represented as dogs immediately signals to the reader that we are in a metaphorical space. This shorthand is a big part of what comics is all about, and highlights the fact that there are expressive options available to the creators of graphic novels that are not there for traditional prose works.  Sturm, the founder and director of The Center for Cartoon Studies, knows this well, and in the pages of Off Season he provides an ample demonstration of the advantages to his chosen form.

Adventures in Cartooning: How to Turn Your Doodles Into Comics
Above and Below: Two stories of the American Frontier