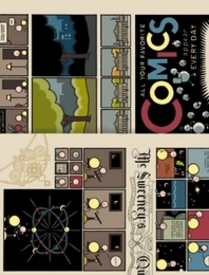 Finally, it's here:  the most anticipated release of 2004 (so far).  Striving for objet d'art status, McSweeney's 13 comes as close as any comics release to attaining it.  Starting with a dust jacket that folds out into a two sided comics poster: the outer side featuring a dense full color, 360º narrative by editor and comics fiend, Chris Ware; the inner side featuring a vaguely ceremonial (think Mayan) worshipping of the idols of comics by Gary Panter.  But there's more:  tucked into the folds of this dust-jacket-cum-suitable-for-framing-wall-art are two mini-comics commissioned especially for this issue; one -- in full color -- by Ron Rege, Jr., and the other in B & W (as it should be) by long time mini-master, John Porcellino.  And that's just the dust jacket!  Moving on to the front and back binding plates (the hard covers beneath the dust jacket), we have a hundred or so images culled from a 1936 guide to cartooning separated by a lavishly embossed spine. The end papers are by Ivan Brunetti, and feature a wallpaper of minimalistic renditions of his personal comics and cartoon hall of fame.  And, finally, there is the contents of the book itself.  The subject of much speculation as to whether it would be reprints or newly commissioned work, the answer is... Both!  About half and half, depending on how you look at it.  Here's how it breaks down:  Some of the work has appeared in non-comics periodicals, but is collected herein for the first time.  Under this category are Mark Beyer, Ivan Brunetti, Kaz, Art Spiegelman (although his pieces are being reprinted everywhere at this point) and some of the pieces by Chris Ware.  Straight out reprints are the inclusions by Charles Burns (although the frontispiece is new), Chester Brown, Debbie Drechsler, Jaime and Gilberto Hernandez, Mark Newgarden, Archer Prewitt, Joe Sacco, Richard Sala (newly colored, however), Seth, and Adrian Tomine.  New to us -- and therefore, we imagine, new to you as well --  are the works by Lynda Barry, Jeffrey Brown, Dan Clowes, David Collier, R. Crumb, Kim Deitch, Julie Doucet, David Heatley, Ben Katchor, Joe Matt, Richard McGuire, Gary Panter, some of the Chris Ware, and of course the aforementioned dust-jacket and minis.  In addition to all this contemporary work, there are selections of classic and archival work sprinkled throughout: First and foremost among these is a 15-page spread on "the inventor of comics," Rodolphe Töpfler, and his first appearance in America, introduced by Chris Ware; an 80% reproduction of an original 1922 Mutt and Jeff daily strip by Bud Fisher that takes four pages to display (which gives you an idea of how big they drew comics back then!); and a nine page spread on George Herriman, introduced by Tim Samuelson and featuring Herriman's last Krazy Kat dailies, also reproduced from the originals.  And, as if this weren't enough, there are two appreciations by Chris Ware, one of the abstract-expressionist-turned-representational-painter-with-a-personal-affinity-for-comics-iconography, Philip Guston, and the other of Peanuts creator, Charles Schulz.  In addition there is a critical appreciation of comics from John Updike, and nostalgiac/elegiac remembrances of comics related experiences by Glen David Gold, Malachi Cohen, and Chip Kidd.  The volume opens with a preface from Ira Glass, followed by an introduction by Chris Ware, who, when all is said and done, is clearly more than simply the editor of this work.  This is a great piece, especially when you consider it's primary purpose:  preaching to the unconverted, those countless, teeming millions out there in America and beyond who don't locate the foundation of their identity in comics.  With this volume, McSweeney's begins a new ambitious distribution arrangement with Publisher's Group West in the USA and Penguin Books in the UK; thereby bringing their publications before a great many more potential readers.  They couldn't have chosen a better volume to initiate this venture.  Let's wish them luck.

ONE COPY (NM; includes both the Porcellino and Regé mini-comics)

This item belongs to the categories: Gift Catalogue, Copacetic Select, Anthologies, Copacetic Collectibles
This item is part of the series: McSweeney's
You may also enjoy these related titles:

Come Over, Come Over