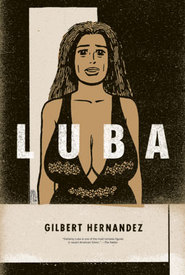 At last!  The second hardcover collection in the epic saga that began with the mammoth (and now, sadly, out of print*) Palomar.  Luba is a massive 600 page hardback that collects the entirety of the three previously released softcovers, Luba in America, Luba: The Book of Ofelia, and Luba: Three Daughters, and then some. The combined retail price of these three softcover trades is $59.97 making the choice of this stunning hardcover a no-brainer for anyone who had yet to purchase this amazing material.  And not only that, this time around the work is printed on non-reflective flat white stock yielding superior image quality, which it will make tempting to even those who already have the trades.  Luba follows the the titular character along with a large supporting cast that spans three generations and the environs of Mexico and southern California. This is a series that  is populated by some of the most colorful characters in the history of comics and that's saying something considering they're all printed in black & white. There are plot lines, actions, reactions and interactions galore.  There is powerful social commentary side by side with action and laughs, and more insight into character formation and sexual development than you will find anywhere else.  Act now to take advantage of our special price! (offer ends 20 June 2009) (*However, there's no need to despair as the entirety of Palomar is available in three excellent softcover volumes, here.)

This item belongs to the categories: Graphic Novel, Gift Catalogue, Copacetic Select, Collections
This item is part of the series: Love and Rockets
You may also enjoy these related titles: